Some New York neighborhoods are simply named for their location on a map (East Village, Midtown). Others are given prefabricated designations (SoHo, DUMBO). But a few retain names that link them intimately with their pasts.

Murray Hill is one of Manhattan’s quieter neighborhoods, extending on the east side from 42nd street to 34th street — or even down to 28th street, depending on who you speak to. Its eastern border bleeds into Kips Bay. Its one of downtown Manhattan’s most obvious hillsides, with its most dynamic centerpiece being the buildings along Madison Avenue, including the gorgeous Morgan Library & Museum.

The Murray of Murray Hill was the successful Quaker merchant Robert Murray who bought this quiet hillside in 1762 and built a spacious home here, which he named Inclenberg, installing a large porch that looked out over the East River. Walk up the hilly part of any street between 33rd and 39th (the land where the farm approximately stretched out) and look east, trying to imagine the buildings melting away and an unobstructed view of the river emerging.

The pride of Murray Hill, however, is not Robert, but his wife Mary Lindley Murray. She was probably looking from her porch on September 15, 1776, when the British landed at Kip’s Bay in their eventual takeover of New York. Just a few days prior, Mrs. Murray had entertained the young commander George Washington, whose bedraggled Continental Army, under the command of general Israel Putnam, was heading out of town on the west side (along a path which is today the West Side Highway). With a superior British force in hot pursuit, they would have been easily captured and the American revolution effectively dissolved. 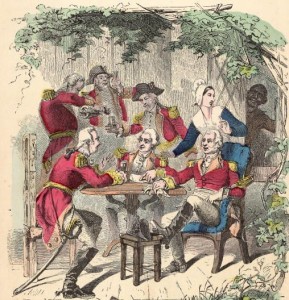 However, as the legend goes, many lives were saved that day and the fate of the Army spared because of a little gracious hosting. As the British force assembled, Mrs. Murray invited the officers, including General William Howe, up to her house for a spot of “cake and wine.” Her charms — and those of her daughters Savannah and Beulah — must have been irresistable, for the officers stayed for over two hours, while the rebel American forces escaped up to Harlem Heights.

While eventually some of Washington’s army would be captured nearby, the bulk of the forces were spared, simply because of the delay brought on by courteous party hosting.

What makes this story all the more compelling is that Mary probably differed politically from her own husband (away in London on business at the time of the invasion) who was a Loyalist to the crown. However members of her own clan, the Lindleys, fought with the Continental Army and Mrs. Murray was clearly sympathetic to the American cause. Of course, her real motives might have been altogether indifferent to the war entirely; regardless, she is undoubtedly one of New York’s great hostesses. 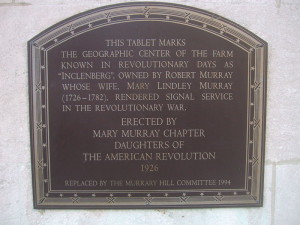 Today, the neighborhood has the unique distinction of having a drag king entertainer named after it.