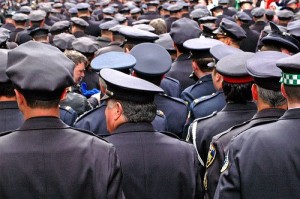 Few events in New York can trace themselves as far back as the annual St. Patrick’s Day parade, a tradition that has been celebrated in some form since 1766. The spirit of ‘everybody’s Irish for a day’ was not in effect; that first parade was a strictly military affair, featured only Irish soldiers in the British army. By the 19th century, however, it was the Irish fraternal orders leading the march towards its current blend of ceremony and frivolity.

To get in the spirit, why not go back and listen to our podcast on that most venerated of Irish New York landmarks Ole St. Patricks? And check here to find out more about one of the parade’s early sponsors, the Ancient Order of the Hibernians.