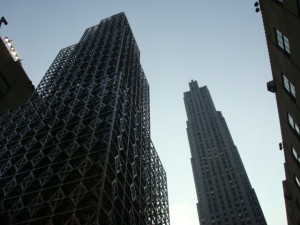 Summertime at Rockefeller Center plaza has seen gigantic puppy dogs and monster spiders. This year, however, they take a more literal reach into the mind of a child.

Sitting at the eastern edge is this year’s summer Public Art Fund spectacle, ‘What My Dad Gave Me” by Chris Burden, a 65-foot-tall replica of the Rock Center tower made entirely out of Erector set pieces (or at least very accurate facsimiles).

Burden has dabbled in miniature constructions in the past, including a 28-foot model of the East River’s Hell Gate Bridge. The new piece is placed just so for maximum comparison to the building it mimics.

This is probably one of the most family friendly works in the Burden oeuvre. He’s best known for death-defying stunts such as crucifying himself to a Volkswagen, laying motionless in a museum gallery for 45 hours, crawling through shards of glass, and being shot in the arm with a .22-caliber rifle — all in the name of art.

I would have liked to see Rock Center stage one of those instead, seeing as they’re no stranger to controversy. (I wrote about their past art scandals a few months ago.) What tourist wouldn’t want a few snaps of a man in excruciating pain atop an oddly placed German car?

The mini-Rock will tower over its end of the Center’s Channel Gardens until July 19. I’ll start work on my Chrysler Building made of Lincoln Logs sometime over the summer…. 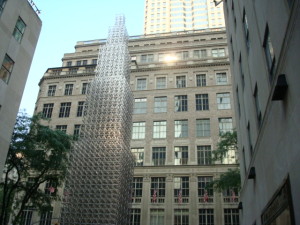