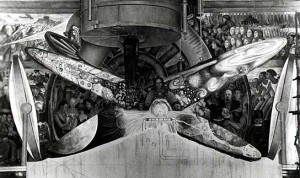 Despite JD Rockefeller Jr’s aversion to the ‘impropriety’ of modern art, Rockefeller Center has always been bursting with it, from the large outdoor installations sprouting up in the plaza to the gorgeous art deco blazing from its walls.

As with modern art for public display however, the Rock has sometimes riled the community with challenging and occasionally offensive art pieces.

The most famous of course is Diego Rivera’s Man at the Crossroads (pictured above), his epic mural created in 1933 with the supposed theme of ‘new frontiers’. Rivera was a favorite of Rockefeller’s wife Abby, having feted the artist in a show at the Museum of Modern Art in 1931. Rivera, however, was no tool of the rich. Amongst the many May Day figures depicted in Rivera’s expressive narrative mural is one Vladimir Lenin, communist leader and Marxist icon.

He was asked to repaint the Lenin figure but Rivera staunchly refused. The press had a field day, finding the depiction insulting and pressuring the Rockefellers to completely cover the mural, then a few months later, destroying it entirely. One photograph of the mural remains — and of course, a near exact copy that Rivera later painted in Mexico.

Yet another depiction of another controversial leader was allowed to stay. 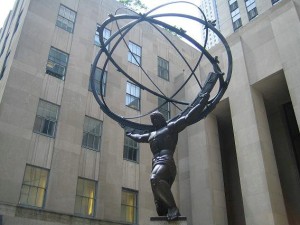 Just a few years later in 1936, art deco master Lee Lawrie created his mighty two-ton Atlas, probably one of the most recognizable pieces of artwork in the city of New York.

He currently stands directly in front of St. Patrick’s Cathedral, so you can imagine the surprise of many when it was rumored the face of Atlas was modelled after Italian dictator and all around bad guy Benito Mussolini. Although protestors picketed the statue, good Atlas was allowed to stay.

Flash forward a few decades to 2002 and a more modest piece that sat briefly in the Rockefeller Center concourse, not far from the skating rink — Erik Fischl’s Tumbling Woman. A bronze figure in the style of Rodin, this image of a falling woman installed as a Sept. 11 memorial on its first anniverary greatly disturbed passers-by.

After the New York Post threw the controversy on its front page, the figure was removed. Interestingly, the artist never intended the sculpture to be displayed publicly at all. 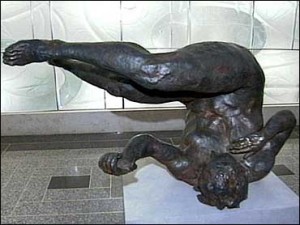 Then there were Louise Bourgeois’ gigantic spiders, which stood commanding the plaza for the entire summer in 2001.

As illustrated with all the previous art pieces discussed, timing (or rather, bad timing) is everything. These pieces might have been too disturbing for people had they been standing just a few months later, in the wake of Sept. 11. As they were only around for the summer, however, the only real controversy were several mild cases of nausea and probably a few panicked children. 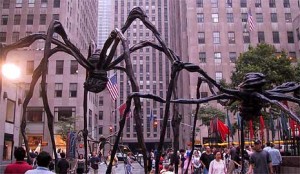