In the days of Collect Pond, the surrounding area was equally diverse and almost impossible to mentally construct today. Southeast of the pond was a place known as Beekman’s Swamp, a wetland drained by British landowner Jacobus Roosevelt on what would much later become the entrance to the Brooklyn Bridge.

Situated north of Collect Pond (“from… Worth Street to Spring Street“) and just west of today’s Broadway, the swamp was eventually split by the newly built canal and drained in the 1810s.

But prior to that, according to legend, acts of horror and depravity supposedly took place here in the latter years of British occupation of the city.

Thousands of British and Hessian soldiers poured into the British holding of New York between 1776 and 1783. You can find details of the outrageously crowded conditions on one of our prior podcast on the subject of life in British New York.

Below: The intersection of Canal Street and Broadway, circa 1812. Lispenard Meadow would have been on the west side of Broadway 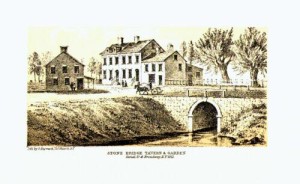 To satisfy these men’s carnal cravings, an enterprising captain named Jackson “kidnapped” 3,500 prostitutes from England. Most likely the women were coerced with promises of cash or opportunity in a time when it appeared New York would forever remain a British property.

Packed into twenty boats, they sailed to New York. Not all of them made it. One boat sank mid-voyage presumably killing all onboard, so Jackson decided that to make his quota of women, he would simply swing by the West Indies and take 350 more — possibly slave women already but all of African background.

Once arrived in New York, the captives were kept in a stockade located here in Lispenard Meadow, where the women became sexual prisoners to serve the needs of the British troops. Known as the ‘Jackson Whites’ and the ‘Jackson Blacks’, these women were allegedly locked inside the stockade until the moment the British fled New York in 1783.

There’s really little documentation to prove all the seamier details of this story. Although such a lurid story isn’t outside the realm of possibility, it exists only as a story among the native people of the Ramapo Mountain range, who supposedly trace their lineage to these women, fleeing from New York after the war to reside in this supposedly Tory-friendly area of northern New Jersey.

Still, strolling through Soho past high fashion boutiques and major chain clothing stores built on land that potentially kept a massive sex prison has a odd symbolic quality to it, no?

1 reply on “Was there really a British sex prison in SoHo?”