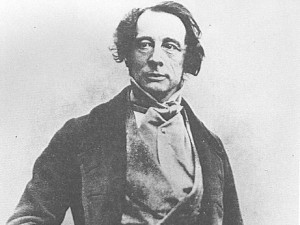 What is this dismal-fronted pile of bastard Egyptian, like an enchanter’s palace in a melodrama! – a famous prison, called The Tombs. Shall we go in?

And thus in this voice continues the eager, fey, often condescending but spectacularly written account of Charles Dickens’ New York excursion as captured in his “American Notes for General Circulation,” written in 1842. (Read the entire thing here.)

Dickens’ was among the first published travelogues about America for European audiences, and among his travels through the states he devotes an entire chapter to young New York.

How young precisely? Dickens gives us a yardstick to measure it: “The great promenade and thoroughfare, as most people know, is Broadway; a wide and bustling street, which, from the Battery Gardens to its opposite termination in a country road, may be four miles long.” During the 1840s, the city would have ended at 42nd street, so this sounds accurate. 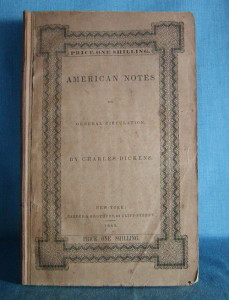 Dickens’ tone throughout “American Notes” is ebullient but persnickety, as if he’s smiling and curling his nose at the same time as the sights and sounds of the city. In real life, Dickens was treated like royalty, feted in sumptuous celebrations at the Park Theatre and Delmonico’s, courted by literati such as New York Evening Post editor William Cullen Bryant and aging Washington Irving.

Dickens had an ulterior motive to his American journey: to discuss international copyright laws, presently being violated with American reprints of Dickens novels. Surprisingly he turned most Americans off with what they considered to be ungrateful sniping. A bit of that shared animosity seeps through some of Dickens depictions, especially those in New York, which was doing a bulk of the copyright violation.

The book’s most famous descriptions come in his colorful look at Five Points, already a legendary neighborhood of filth and vice by 1842. These passages could have been ripped from any of his most famous novels:

“Ascend these pitch-dark stairs, heedful of a false footing on the trembling boards, and grope your way with me into this wolfish den, where neither ray of light nor breath of air, appears to come….”

“Here too are lanes and alleys, paved with mud knee-deep, underground chambers, where they dance and game; the walls bedecked with rough designs of ships, and forts, and flags, and American eagles out of number: ruined houses, open to the street, whence, through wide gaps in the walls, other ruins loom upon the eye, as though the world of vice and misery had nothing else to show: hideous tenements which take their name from robbery and murder: all that is loathsome, drooping, and decayed is here.”

And as if that wasn’t enough gothic material for him, he ends his New York piece by touring Blackwell’s Island (today’s Roosevelt Island), home of the city’s various asylums for lunatics and criminals:

“…everything had a lounging, listless, madhouse air, which was very painful. The moping idiot, cowering down with long dishevelled hair; the gibbering maniac, with his hideous laugh and pointed finger; the vacant eye, the fierce wild face, the gloomy picking of the hands and lips, and munching of the nails: there they were all, without disguise, in naked ugliness and horror.”

The New York chapter is reprinted in full here.

Below from the Charles Dickens Page, a list of all the places he visited during his American stay. They also feature a thorough description of his entire journey. 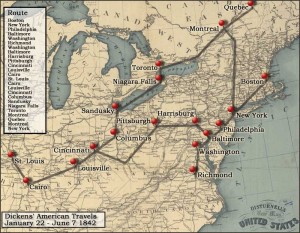 hi there, I LOVE this. I am writing a film/series about Charles Dickens and just moved to Bond Street. This is a great blog and hope I can be helpful in some way to your work. I had not idea I had moved to an area Dickens wrote about. Have been living in London for the project and just got back here.