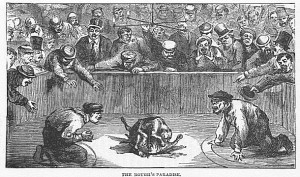 An excerpt from “Lights And Shadows of New York Life; or, the Sights and Sensations of the Great City” by James D McCabe Jr, published in 1872, quantifying the gang element of New York under the quaint sobriquet ‘the Roughs’:

“Another class of those who live in open defiance of the law consists of the â€œRoughs.â€ The New York Rough is simply a ruffian. He is usually of foreign parentage, though born in America, and in personal appearance is as near like a huge English bull-dog as it is possible for a human being to resemble p. 544a brute. Of the two, the dog is the nobler animal. The Rough is not usually a professional thief, though he will steal if he has a chance, and often does steal in order to procure the means of raising money. He is familiar with crime of all kinds, for he was born in the slums and has never known anything better.

They are the patrons and supporters of dog and rat pits, and every brutal sport. Their boon companions are the keepers of the low-class bar rooms and dance houses, prize fighters, thieves, and fallen women. There is scarcely a Rough in the city but has a mistress among the lost sisterhood….The Rough, on his part, beats and robs the woman, but protects her from violence or wrong at the hands of others.

Often gangs of Roughs will enter the pleasure grounds in the upper part of the city, in which a pic-nic or social gathering is going on, for the sole purpose of breaking up the meeting. They fall upon the unoffending pleasure-seekers, beat the men unmercifully, maltreat, insult, and sometimes outrage the women, rob all parties who have valuables to be taken, and then make their escape.

The Rough does not hesitate to commit murder, or to outrage a woman. He is capable of any crime. He is a sort of human hyena who lives only to prey upon the better portions of the community. Crime-stained and worthy of punishment as he is, he walks the streets with a sense of security equal to that of the most innocent man.

This feeling of security is caused by the conviction on his part that he will not be punished for his misdeeds. The reason is simple: He is a voter, and he has influence with others of his class. He is necessary to the performance of the dirty work of the city politicians, and as soon as he gets into trouble, the politicians exert themselves to secure his discharge. They are usually successful, and consequently but few Roughs are ever punished in New York, no matter how revolting their crime.

This is not all, however. There are well authenticated instances in which men of this class have been carried by their fellows, oftentimes by ballot-box stuffing and fraudulent voting, into high and responsible offices under the city.”