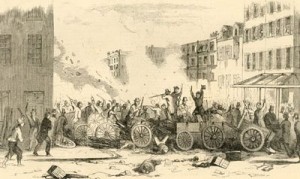 The Bowery Boys-Dead Rabbits kerfluffle: it definitely happened, but not how you think it did

In one of the sources we used for this week’s podcast — Tyler Anbinder’s wonderful and sober history on Five Points — the author throws out a theory that’s truly devastating for lovers of New York history, one that flies in the face of many hallmark works of history, including Gangs Of New York (which features passages more steeped in folk tales than actual history).

According to Anbinder, the Dead Rabbits, one of Five Points most legendary gangs, wasn’t even a gang at all.

More famous New York accounts claim very dramatically that there was a Dead Rabbit gang, composed of Irish Five Pointers, who trolled the streets looking for trouble, particularly adroit in robbery and pickpocketing. They were a splinter group of another early gang that formed in the saloon of Walter Roche* at 19 Mulberry Street. A dispute broke out within this ‘Roche Guard’, and, as the legend goes, somebody threw a rabbit corpse onto the floor, giving the splinter group its new name. It apparently went well with the slang of the day –“dead” meaning “extremely,” “rabbit” meaning “fearful”.

The Roche Guard and the Dead Rabbits were mortal enemies, dodging each other through the Five Points streets even as they performed their illicit misdeeds. But as they say, the enemy or your enemy is your friend, and when the Dead Rabbits sparred against the Bowery Boys on July 4, 1857, the Roches and other gangs of the Five Points took the Rabbits side. Given the complicated nature of the day, the gangs fought alongside two sets of New York police forces, the Metropolitan and Municipal police, one a unit of the mayor Fernando Wood, the other formed by the state. (You can read all out it in our old Know Your Mayors segment on Wood.)

The skirmish was the subject of legends and folk songs, including this one from 1857:

“The new Police did join the Bowery boys in line,
With orders strict and right accordin ;
Bullets, clubs and bricks did fly, and many groan and die,
Hard road to travel over Jordan.

When the new police did interfere, this made the Rabbits sneer,
And very much enraged them accordin ;
With bricks they did go in, determined for to win,
And drive them on the other side of Jordan.”

The story plays like an Arthurian legend, even in respected historical texts. Corrupting matters worse are their depiction in the Martin Scorsese movie “Gangs of New York,” which warps their chronology for dramatic purposes.

Using actual eyewitness reports from Five Points residents, Anbinder claims that there never was a group specifically called the Dead Rabbits, that it was a mere nickname thrown out by the Bowery Boys to disparage the Roche Guard and other gangs who were attacking them.

Accounts from this period would have more likely used members of the Bowery Boys gang as sources for their stories, as the Metropolitan Police (on the side of the Bowery Boys) were the ‘legitimate’ police force. To confuse matters even further, the police referred to them generally as the ‘Mulberry boys’, another false name which stuck in some historical accounts.

Was there a gang that wore a red stripe on their pants and hoisted a dead rabbit carcass on a stick through the streets?

The romantic notion is irresistible. Most likely some faction of the Roche Guard or some other Five Points gang did perform in this fashion, but they did not call themselves Dead Rabbits.

*To show you just how uncertain any of this is, another tentpole history of this period — Luc Sante’s Low Life — claims the group was formed by a Ted Roach.