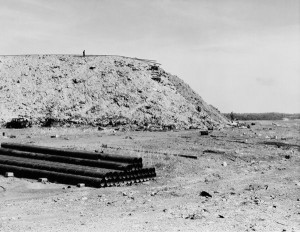 “About half way between West Egg** and New York the motor road hastily joins the railroad and runs beside it for a quarter of a mile, so as to shrink away from a certain desolate area of land.

This is a valley of ashesâ€”a fantastic farm where ashes grow like wheat into ridges and hills and grotesque gardens; where ashes take the forms of houses and chimneys and rising smoke and, finally, with a transcendent effort, of men who move dimly and already crumbling through the powdery air.

Occasionally a line of gray cars crawls along an invisible track, gives out a ghastly creak, and comes to rest, and immediately the ash-gray men swarm up with leaden spades and stir up an impenetrable cloud, which screens their obscure operations from your sight…..

The valley of ashes is bounded on one side by a small foul river, and, when the drawbridge is up to let barges through, the passengers on waiting trains can stare at the dismal scene for as long as half an hour. There is always a halt there of at least a minute, and it was because of this that I first met Tom Buchananâ€™s mistress.”

That’s F. Scott Fitzgerald’s charitable description of Corona Ash Dumps, an artificial mountain range of detritus that once shaped the landscape of central Queens, used to great symbolic effect in The Great Gatsby. Strangely, this heap of horrificly gray land is one of Queens’ best known appearance in great literature.

‘Gatsby’ was published in 1925. In a little over ten years, this ‘valley of ashes’ would be forever removed, purchased by the city and transformed into one of Robert Moses’ greatest pet projects — Flushing Meadowsâ€“Corona Park, the location of the 1939 World’s Fair. 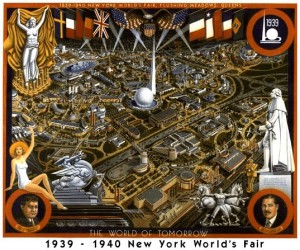 **Scratching your head over where West Egg is? That’s Fitzgerald’s clever disguise of the nearby town of Great Neck. If you knew that already, send your high school English teacher a bouquet of flowers!

Yeah I knew that. My high school English teacher taught me well. It probably also helped that I went to high school in East Egg.

The “West Egg” identity is new to me. If you’re so smart, what’s the green light, then?