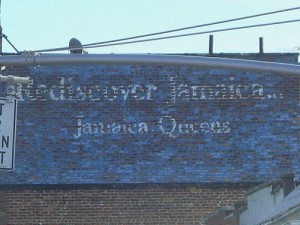 Some New York neighborhoods are simply named for their location on a map (East Village, Midtown). Others are given prefabricated designations (SoHo, DUMBO). But a few retain names that link them intimately with their pasts. Other entries in this series can be found here.

I have a friend of Jamaican descent that lives in Jamaica, Queens. I used to think that was like a French Parisian moving to Paris, Texas. That’s wrong, actually. Paris, Texas, is actually named for the French capital. Jamaica, Queens, meanwhile, has almost nothing to do with the Carribean nation that shares its name. (Although many of Jamaican island descent do live in the Queens borough today.)

Jamaica is an English distortion of an Algonquin tribe that inhabited this Long Island outpost — the Jameco Indians (also referred to as the Yamecah tribe). They were named after the Algonquin word for beaver.

The Jameco lend their name to various parts of the city, from Jamaica Bay (the body of water in front of JFK airport) to Jamaica Avenue, a prime extension of East New York Avenue through Brooklyn and eastern Queens.

A pathway between Brooklyn and the city of Jamaica, called the Jamaica Pass, was used to the British’s benefit during the war of 1776, sneaking around American forces and chasing them back to Manhattan.

By then, the British were calling the town of Jamaica by its modern name. The Dutch before them, however, had referred to the village there as Rustdorp, settling there in 1656 and officially coined by none other than Peter Stuyvesant. I leave it up to you to determine which of these names sounds like more exciting and vibrant community.

As for the island of Jamaica, it was inhabited by a tribe of Arawak indians, who named their place Xaymaca, which holds the far more flattering translation of “land of wood and water.”

Photograph above is from the Fading Ad Blog.

10 replies on “Name That Neighborhood: Why is Jamaica in Queens?”

Quite fascinating! Thanks for using my image and providing a link. I also posted a reference to your article.

I’ve always wondered about the origin of Jamaica, Queens. Thanks for the info.

Thanks for the info on the word origins of Jamaica, NY.
It’s interesting to note that both original words not only sound the same are connected by the fact that beavers use both wood and water to make their necessary addition to the landscape.
Guidance.
A Yaad Man

I have several editions of the Jamaica High School yearbook from the late 1930’s and early 1940’s which feature said beaveras a logo. Also does Jameco Chevrolet still exist, it did through the sixties when I was growing up in Jamaica.

No, my father was employed at jameco.

Jameco Chevrolet closed down a few decades ago. I think around ’88-’90. It became a dairy store, then a school bus depot, and it is now a laundry mat.

Very informative article. I used it as a second source to verify the origin of the name od my old neighborhood. While in high school during the 70’s I remember being told the name came from pirates who hid their ships in Jamaica Bay and were reminded of inlets in the Caribbean Jamaica, used for the same purpose. It sounded logical and I never bothered to fact check, though I did study some history of the area. Thank you for this!

Thanks for sharing. One common fact seems to be that the English named both the Island in the carribean and the subdivison of the island in NY. The alleged use of corrupted names from indigenous peoples colors the history but doesn’t change the political motivation. Many of the street names in Brooklyn, NY are present throughout Long Island townships. Did the new residents have a lack of imagination maybe a desire to control newly “settled” lands by naming them the same as those in the familiar homeland?

My grandparents Frank Turner and Frosty Anne Turner moved to 108-15 171st St. in Jamaica NY. Street names are not what they are today. They had the first tennis courts in their yard!

Thank you for this, I have always wondered about it and didn’t look it up until to today. My grandmother grew up in Brooklyn and ended up marrying “a country boy” and moving out to Huntington, LI. She always talked about how she would go to Jamaica when she needed to shop for clothing and other household things until Long Island developed more. When I was very small I thought that she meant that she was going to the Carribean Island. My mom nearly stopped breathing with laughter when I asked how Grandma got there and back in one day.