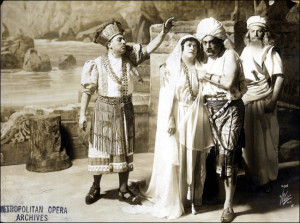 Caruso, wearing the big white turban, during the 1916-17 performance at the Met

The Plaza Hotel might have been built on the fortunes of a barbed-wire magnate, but its continued existence throughout the years partially stems from its popularity amongst the bold-print set. Celebrities, however, come with a drawback. Along with their famous name and the press and attention that comes with it, so too comes the occasional diva behavior, the irrational requests, the vituperative red-faced conniption.

This famous hotel has seen its share, but none more famous than the one thrown by its first superstar guest — Enrico Caruso.

At the beginning of the century, there were few more famous than Caruso, an internationally-renown Italian tenor and the world’s first recording star. He performed with the Metropolitan Opera for 17 years. And at least at the very beginning would stay at the Plaza. (Over time, he would prefer the late Knickerbocker Hotel in Times Square instead.)

Caruso was a fabulous, eccentric character, exceptionally gifted, occasionally erratic. In 1906, he was accused of molesting women in the monkey house at the Central Park Zoo, and the details of ensuing — and highly publicized — trial stretches far into the realm of the absurd. (It involves trenchcoats with holes in the pockets, an alleged “sexual free-for-all” and a monkey named Knocko.) He was fined $10 for the incident. 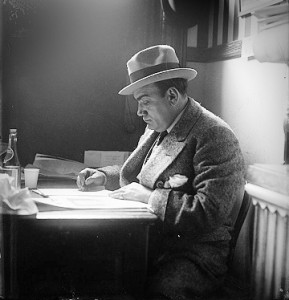 One night after a performance at the Met in 1907, Caruso returned to his luxurious corner room at the Plaza to sleep. However, throughout the evening he was kept awake by the sound of ticking electric Magneta clock on the mantel. Tormented by the device’s rhythmic tick-tock, he erupted in the middle of the night and attacked the clock, in some accounts with a knife, in others, destroying the timepiece with his own shoe.

The problem with this particular tantrum, however, was that the entire hotel was fitted with these Magneta clocks, and all the clocks were wired to each other. Caruso had not only taken out his own clock, but effectively broke every clock in the hotel.

According to Curtis Gathje, the hotel managers responded with extraordinary restraint, instead sending Caruso complimentary champagne as an apology for inconveniencing him. Certainly, this would not become the model for handling later tempestuous musicians who trash their hotel rooms.

By the way, did you know the Enrico Caruso museum is in Brooklyn?

Great photographs to the article.

What a fascinating tidbit! What’s almost as interesting is the fact that all of the clocks were connected to each other. I wonder how many people were late to appointments because their clocks weren’t functioning. http://www.satisfiedsole.com

So, if I follow this correctly, Caruso smashed a wall clock. This is the “vituperative red-faced conniption” of which “[t]his famous hotel has seen its share, but none more famous than the one thrown by its first superstar guest — Enrico Caruso” ???

Really? He smashed a wall clock, and that’s news almost a century later?

The fact that destroying a wall clock somehow takes out the entire hotel’s collection of clocks isn’t Caruso’s fault. If I remove a lightbulb from a socket so I can sleep, and the city block goes dark as a result, I’m hardly to blame.

“[T]he hotel managers responded with extraordinary restraint” – presumably, by not firing the massive idiot who wired their clocks.