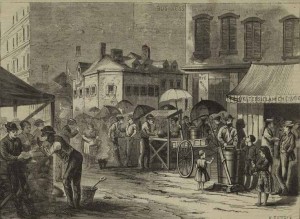 Above: the crowded streets of Five Points, where the Forty Thieves first made mischief

What does it mean to be the ‘first’ gang in New York? Most likely, it means you weren’t really the first. Just the first to be caught at doing it.

New Yorkers seem to create a grim romanticism around 19th century gang life because the underworld they lived in seem increasingly more exotic. They were unofficial rulers of neighborhoods vastly changed today. Hell’s Kitchen. The Tenderloin. The sleazy Fourth Ward.

And of course Five Points, the centerpiece of the Sixth Ward. That’s where New York’s first recorded gang, the Forty Thieves, got their start, in the back room of the ‘grocery store’ owned by one Rosanna Peers.

No evidence remains of what Rosanna might have looked like, but gather together what you will from the evidence. Selling hard liquors along with “brown-streaked cabbages and tattered lettuce,” Rosanna’s establishment was ostensibly the first bar on Centre Street in 1825, and would certainly not be the last.

I wouldn’t exactly lionize her abilities, but you can’t say she wasn’t an entrepreneur of sorts. The cheapness of her “rutgot rum” attracted the most charming thugs and pickpockets in the city, and soon they formed a merry band of crooks, watching each other’s backs, delineating common territory, and sharing their ill-gotten wealth. The Forty Thieves — almost all Irish immigrants and almost certainly more than forty — would grow to terrorize the streets of downtown New York for over 25 years.

Their first leader was Edward Coleman who must have some certain gruff charm as he gathered up teams of dime criminals for more elaborate jobs, including staking out this corner of Five Points, defending it from rivals. His organization included a rather strict quota system, where members had to bring back a certain amount of stolen goods or be thrown out. Rejects were either disposed of or fled to join rival gangs that soon organized in other neighborhoods.

Coleman would lead until 1838, when he violently beat and killed his wife, a ‘hot corn’ girl who had brought back inadequate wages from a day’s work. This heinous crime earned Coleman the distinction of being the first man hung in the newly built Tombs prison, just a few blocks away.

The Forty Thieves lived on without him and were such a successful organization that they recruited younger delinquents for a specialized Forty Little Thieves, filthy tots from the street of Five Points dispatched like ruddy faced Oliver Twists to pick pockets and troll the streets for law enforcement.

They fade away into New York history, breaking off and joining other, more powerful and more politically connected gangs. They were only the seed of lawlessness in a neighborhood that would soon grant a wretched neighborhood its rather notorious status today.

As for Ms. Peer, she apparently felt no ambivalence about her clientele; another early Five Points gang, the Kerryonians, also used her rum-filled backroom as a headquarters. The Kerryonions, comprised specifically of Irish immigrant men from the county Kerry, were less terrifying than the Forty Thieves — unless you were British, whom they reserved a special hatred for.

Below: the approximate location of Ms. Peer’s grisly grocer:

Thanks, I had this as a school project (:

Thanks I had to do a project in them in my fire class today.. Where on gangs.. But what made him kill his wife tho..