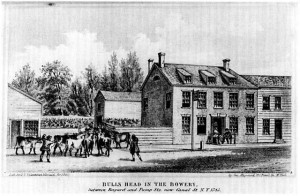 To get you in the mood for the weekend, every other Friday we’ll be celebrating ‘FRIDAY NIGHT FEVER’, featuring an old New York nightlife haunt, from the dance halls of 19th Century Bowery, to the massive warehouse clubs of the mid-1990s. Past entries can be found HERE.

Last time around, I wrote about Max’s Kansas City, a steakhouse that served up a side of punk and pop celebrity like a glamorous cattle call. It has a few things in common with another centerpiece of social life that attracted a few of New York’s boldfaced (in this case, Washingtons and Astors), combining truly Revolutionary business with pleasure. And it had plenty of red meat, of the pre-prepared variety.

The Bull’s Head Tavern was the gathering-place for farmers, drovers, and merchants in the 18th century, located well outside city boundaries just east of Collect Pond. (At the Bowery, right at the entrance to the Manhattan Bridge.)

It soon became the center of Manhattan’s entire meat selling and rendering industry, with the area surrounding the nearby Collect overrun with tanneries and slaughterhouses. As the Bull’s Head was also located right on the Boston Post Road (later the Bowery), situated at a crossroads of livestock yards and stables, it became an ideal place for both commerce and carousing.

The Bull’s Head was in operation as early as 1755, enjoying business as “the last halting-place for the stages before entering the city.”

Within the next few decades, industry enveloped the area, transforming the Bull’s Head into a cattle market, with pens adjoining the main building where farmers from the surrounding area herded their best specimens for sale. Inside the tavern became a literal stock market, with transactions, news and gossip being shared over brew and a hot meal. Those who lingered well into the night sometimes played a strange game called crack loo — often gambling away any profits they might have made earlier in the day. Out in the pen, dog fights and “bear baiting” sometimes occured as entertainment. 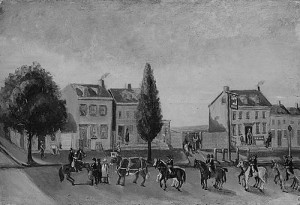 As Washington Irving describes, at the Bull’s Head he would “hear tales of travelers, watch the coaches and envy the more pretentious country gentlemen in Castor hat, cherry-derry jackets and doeskin breeches.”

On November 25, 1783, Evacuation Day, the Bull’s Head entered history. As the British fled New York that day, George Washington and his entourage met at the Bull’s Head, preparing themselves for their triumphant entry into town. Governor George Clinton and over 800 uniformed troops and townfolk gathered right outside, preparing for the procession.

Henry Astor, the older brother of John Jacob, stepped in as owner of the Bull’s Head in 1785. Already an accomplished butcher, Henry served his “celebrated cuts of meats” and often outpriced his own clientele when a particularly choice herd of cattle came travelling by.

Of course, New York was outgrowing its old boundaries by then. By 1813, Collect Pond had been drained and high society eyed the Bowery, sweeping away the filthy stockyards and factories to construct homes, shops and theatres. Moving with the changing times, some civic minded businessmen bought out Astor and moved the Bull’s Head somewhere safely outside the city — this time at 3rd Avenue and 24th Street!

In 1830, this new location fell into the hands of young rancher and entrepreneur Daniel Drew, who turned the tavern into a sort of bank, marketplace and social club for local cattlemen, upgrading the establishment and building his own reputation as a saavy financier.

As this time, according to an old history, “various types of men mingled in the bar-rroom of the Bull’s Head, from the rough country man to the speculative citizen, butcher and horse-fancier. Plain apple-jack and brandy and water… were the principal liquors passed over the bar. Guests were so numerous that at the first peal of the dinner-bell. it was neccessary to rush for the table or fail miserably.” And of course, after hearty meal and vigorous drink, came the gambling, “throwing dice for small stakes.”

Drew eventually went on to become a steamboat mogul. The site of the old Bull’s Head eventually hosted the notorious Bowery Theatre (built upon its old cattleyards), then the sumptuous Atlantic Gardens by the mid-19th century.  Drew’s uptown location on 24th, of course, caved in to a growing residential neighborhood. However, today there is a new Bull’s Head Tavern, at that exact location, that probably smells a lot better than the original.

And not to forget, there was also a Bull’s Head Tavern in Staten Island, at Victory Boulevard and Richmond Avenue. Built in 1741, this Bull’s Head was a popular destination for British-loving Tories before the days of the Revolutionary War. Before it was destroyed in a fire, “people from all over the country made special trips to the old house, just to see the famous Tory headquarters,” according to one old history.

The neighborhood that sprouts around that intersection at Victory and Richmond is named Bulls Head in the old tavern’s honor.

2 replies on “Bull’s Head Tavern: treating you like cattle since 1755”

Historian David Freeland discusses what may be the site of the tavern:
http://video.foxnews.com/v/2772565382001/washingtons-bar-found/

Hello!
Additional information regarding the owners of the Bull’s Head Tavern: Richard Varian and his wife Susannah (Gardinear) were the original owners prior to Astor. Referenced in many places throughout the internet. Once specific reference is “Reminiscences of the Old Fire Laddies and Volunteer Fire Departments of New York and Brooklyn.” by J. Frank Kernan, A.M. Published 1885 by M Crane, 21 College Place. Page 296 references “Mrs. Varian” – date 1782 and page 300 states “The Bull’s Head Tavern, which stood at the head of the Bowery, famous as the last stopping-place of Washington before he made his entry into the city, was kept as early as 1770 by one Richard Varian, who was keeper of the public slaughter-house”.