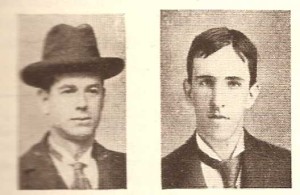 PODCAST: The Whyos (pronounced Why-Ohs)Â were New York’s most notorious gang after the Civil War, organizing their criminal activities and terrorizing law abiding citizens of the Gilded Age. Find out when they lived, how they broke the law and who they were — from Googie Corcoran to Dandy Johnny, as well as two particularly notable guys named Danny. ALSO: How much does it cost to have somebody’s ear bitten off?

Listen to it for FREE on iTunes or other podcasting services. Or click this link to listen to the show or download it directly from our satellite site

Below: Bull Hurley and Dorsey Doyle 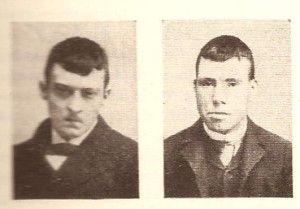 There were some downloading and sound problems on Friday but they should be resolved now, so try again!

3 replies on “The Whyos: Gang of New York – PODCAST”

Hi…just thought I’d mention that the book Metropolis by Elizabeth Gaffney might be of interest to you. The Whyos play a big part in this fictional story.

I read Herbert Asbury’s book and I was always curious about Baboon Connolly. Strangely, he resembles a friend of mine who is a Buddhist and teaches yoga. I remember that Connolly was one of the key figures in the big shoot-out at The Morgue. Does anyone know anything about him and what happened to him?

The nick name Googy could be derived from the gaelic slang word for egg. I’m looking at that mugshot
https://en.m.wiktionary.org/wiki/goog