I’m busily working a new podcast which will be available by tonight. In the meantime, enjoy this really old photograph of the extravagent photo studio of Charles D. Fredricks, sometimes known simply as C.D Fredricks. This picture of his ‘Temple of Art’ was taken, according to the National Archives, in 1850, although I believe it to be sometime a bit later, possibly 1857. (click on the picture to zoom in and to details)

The ‘Temple’ was located at 585 & 587 Broadway near Houston Street, nearby many other photographic studios, and not too far from the studio of Matthew Brady (at 359 Broadway).

Click here to see an original advertisement from the Photographic Temple of Art. 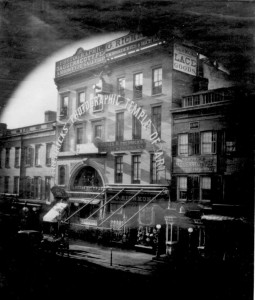 Frank Leslie’s Illustrated News describes thusly: “Fredricks’ Photographic Gallery, 585 and 587 Broadway, was brilliantly illuminated with colored lanterns. The words “Photographic Temple of Art” were formed by hundreds of lamps, covering a semicircular arch of sixty feet in curve. The windows and balconies of these magnificent Daguerrian rooms were crowded during the day with spectators, almost to the interruption of business.

“There is no more popular photographic gallery in New York than this, and no where are portraits obtained with greater fidelity. Fredricks’ Gallery is usually resorted to for groups, especially of military, and he was called upon, on Saturday, to exercise his art on the officers of H.B.M. steam frigate Gorgon, whose portraits he took.” (Thanks to Historic Camera for this description.)

I was admiring this photo over at LOC (I think) the other day – it really is an amazing building. My 3-greats uncle was a daguerreotypist who had a studio in Williamsburgh where he (as the Eagle said) took “cheap photos” – also got into fist fights with the customers. So, not another Fredericks and not Temple material! 🙂