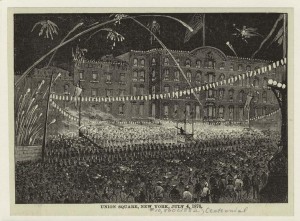 The city of New York unfurled its patriotism in a lavish celebration of America’s 100th birthday. The illustration above pictures a great rally at Union Square. Later revelers would gather at City Hall for an elaborate fireworks display with “volumes of sulphurous vaper wreath[ing] the City Hall until it seemed some mansion of a nether world, some Plutonic castle, where a dim, weird Prosperine might rule and revel.” (Ahem, that’s the New York Times in 1876 for you. )

And where, pray tell, was Boss Tweed?

Hiding out, in disguise with a new name (Mr. Secor), in the streets of Santiago de Cuba, having escaped the Ludlow Street Jail and fled the country. That same night, Tweed enjoyed a lesser display of pyrotechnics from the balcony of the Hotel Lascelles, enjoying a short-lived freedom. Sickly, away from his family, in a place where he barely knew the language, pockets crammed with mostly embezzled money — happy July 4th, Mr. Tweed.

Less than two months later, Tweed would be captured off the coast of Vigo, Spain.

Illustration from Our first century : being a popular descriptive portraiture of the one hundred great and memorable events of perpetual interest in the history of our country. (Springfield, Mass. : Nichols, 1882) Devens, R. M. (Richard Miller), Author. (via NYPL)