Hail to the thief: an imposing man with money on his mind

PODCAST Listen to it for FREE on iTunes or other podcasting services. Or click this link to listen to the show or download it directly from our satellite site
___________________________________
You cannot understand New York without understanding its most corrupt politician — William ‘Boss’ Tweed, a larger than life personality with lofty ambitions to steal millions of dollars from the city.

With the help of his ‘Tweed Ring’, the former chair-maker had complete control over the city — what was being built, how much it would cost and who was being paid.

How do you bring down a corrupt government when it seems almost everyone’s in on it? We reveal the downfall of the Tweed Ring and the end to one of the biggest political scandals in New York history. It began with a sleigh ride.

ALSO: Find out how Tammany Hall, the dominant political machine of the 19th century, got its start — as a rather innocent social club that required men to dress up and pretend they’re Indians.

William M. Tweed, son of a chair maker, as photographed by Matthew Brady in 1865. The Lower East Side would not spawn a man as powerful as Tweed until the rise of Al Smith in the 20th Century. Tweed’s influence, however, came at great expense to the city. 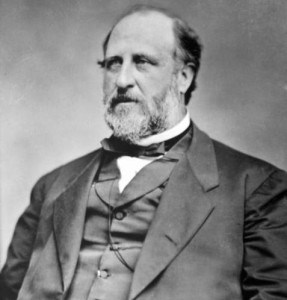 The M. in his middle name is something of a controversy. Marcy or Magear? It’s commonly assumed to stand for Marcy; however, there’s no real documentary evidence for this (according to biographer Kenneth Ackerman) while Magear is his mother’s maiden name.

Below: a younger-looking Tweed appears on a tobacco box 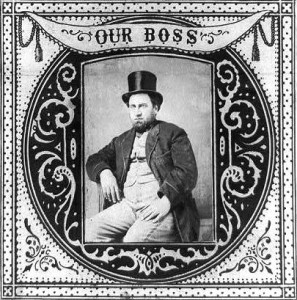 The powerful Democratic machine Tammany Hall (or, officially the Tammany Society) was actually in a hall, located at Frankfurt and Nassau streets, near City Hall. Built in 1811, the new headquarters saw the once benign social organization morph into an influential and often ruthless group with political objectives. 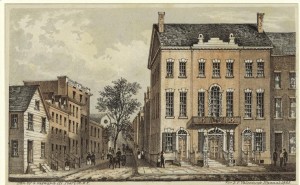 During Tweed’s reign, Tammany Hall was actually located at 14th Street between 3rd Avenue and Irving Place. Tammany moved here in 1867 and would remain until the late 20s, when they would move just around the corner to Union Square. This photo was taken in 1914. Today the Con Edison building, with its beautiful clock tower, stands in its place. 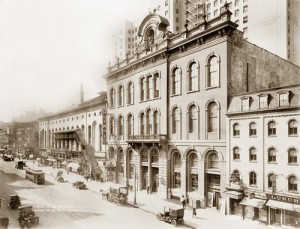 The Tweed Ring — on in this case ‘the Four Knaves’ — as interpreted by their harshest critic, illustrator Thomas Nast. The Ring was composed of Tweed, Mayor A. Oakey Hall, chamberlain Peter Sweeny and ‘Slippery Dick’ Connolly, the comptroller. Emanating from this core group would be other underlings and associates who would assist in the Ring’s graft and embezzlement 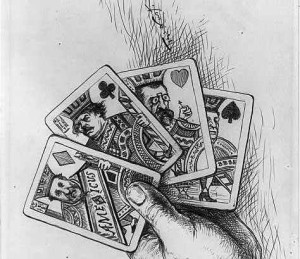 Nast’s charges of voting fraud below weren’t hyperbole. The elections of 1868, which installed Hall into the mayor’s seat and Tammany disciple John Hoffman into the governor’s chair, was one of the most manipulated in American history. Fraud was only too common in New York elections in the 19th century. 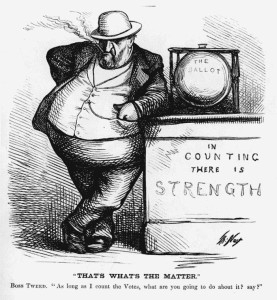 The New York County Courthouse, also known as the Tweed Courthouse for the vast amount money supposedly thrown at it during construction. Contractors would wildly overbill for their often shoddy work, with members of the Tweed Ring skimming from the totals. It would take over 20 years for the building to finally be completed — longer than it took to build the Brooklyn Bridge. 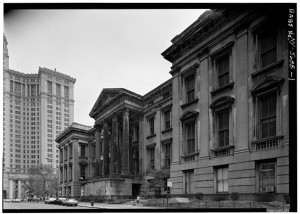 BOOK RECOMMENDATIONS: If you want to learn more about Boss Tweed, go immediately to Kenneth Ackerman’s excellent ‘Boss Tweed: The Rise and Fall of the Corrupt Pol Who Conceived the Soul of Modern New York’. For a broader overview on Tammany Hall, seek out a copy of Oliver E. Allen’s ‘The Tiger: The Rise And Fall of Tammany Hall’ which I believe it out of print but worth looking for.

RELATED PODCASTS: Listen to our prior show on Greenwood Cemetery, where Tweed is buried. Re-visit our Union Square show to get a taste of Tammany’s wily Fernando Wood. Last year I wrote about the Ludlow Street Jail, where Tweed saw his final days.

One minor correction: the quote “I seen my opportunities and I took ’em” was not said by Tweed, but rather by a later Tammany politician named George Washington Plunkitt. This and other words of wisdom can be found in the 1905 book “Plunkitt of Tammany Hall: A Series of Very Plain Talks on Very Practical Politics, Delivered by Ex-Senator George Washington Plunkitt, the Tammany Philosopher, from his Rostrum—the New York County Courthouse Bootblack Stand”; basically, interviews with Plunkitt conduced by the journalist William Riordan.

Thank you Stephanie! You’re totally right. I believe I was confusing it with another line that is frequently attributed to Tweed (though unclear if he ever said it): “What are you going to do about it?” in reference to the seeming impossibility of cracking the Tweed stranglehold.

The Boss and his minions indeed raked in massive amounts of cash while controlling New York, but they did do a substantial amount of good for the new immigrants that filled the old neighborhood, few would know a better patron, a job here a load of coal there, food for thanksgiving, food to survive.

Many detractors would not have minded except they made it so blatant.

There action not so different from now, Trump avoids paying a billion in taxes, assaults whomever he pleases, HC, sells influence to higher bidder, so it is said.

Tweed and his minions built New York, his fingerprints, even now, are all over it.

What have the others built? What have any of them built.