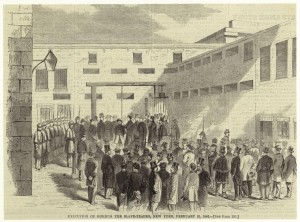 Public hangings were a rare but grisly part of 19th Century New York life. The one illustrated above is from 1862. Another would famously haunt the area near an East Village intersection.

I pass through the intersection of 13th Street and 2nd Avenue fairly frequently on my way home from work. The plain intersection is probably best known as the home of the New York Eye and Ear Infirmary and for being a block away from a movie theater with some rather small movie screens. If you’re a foodie, you probably know it for Momofuku’s Milk Bar.

The most recent modern drama this corner has seen might be the electrified manhole cover that almost killed somebody awhile back. But 185 years ago, when this area was nothing more than a large meadow once the property of the Stuyvesant family, it was the site of one of the most well-attended public execution in American history.

It may be hard to understand why (as some reports suggest) almost 30,000 people came to observe the hanging of John Johnson from this field in 1824.  Another source claims 50,000 people came to see the gruesome execution, which at the time would have been almost one-third of the entire city population of New York.

Perhaps the facts of his crimes were simply too shocking to ignore.  Johnson, a family man who kept his wife and children at an upstate farm, ran a boardinghouse for wayward sailors during New York’s heyday as a port city in the 1820s.  It was located in the bustling heart of the city and dozens of men passed through his door.  It was not exactly a four-star resort, however, and certainly the occasional home for misdeeds. But for the visiting seamen, these types of seedy places were hard to avoid, and the threat of murder would have been bone chilling indeed.

One day in 1823, in a nearby alley, the body of sailor James Murray was discovered, his head split open with a hatchet. Murray was staying at Johnson’s lodge; upon inspection, bloody sheets were found in Johnson’s cellar, and the innkeeper was arrested.

Johnson’s behavior was especially erratic.  He admitted to the crime, then retracted his statement, saying he was merely protecting his family.  He claimed another guest had attacked Murray and that Johnson was merely guilty of “neglecting his duty as a host.” His confession and subsequent about-face piqued public curiosity, with his wife’s letters and even his own minister’s spin on the tale quickly printed up into pamphlets.

Any printed entreaties to his innocence fell on deaf ears.  Decrying his innocence to the end, Johnson was sentenced to hang on April 2, 1824. (I have also seen sources that say April 4.) He was escorted to the gallows by his minister and even infantrymen who had to part the growing crowds, “a solid mass of living flesh — men, women and children of all colours and descriptions,” by one account.

Public executions were actually quite rare by this time or else relegated to one of New York’s lonely islands (such as Blackwell’s Island or the tiny oyster island that would later become Ellis Island).  Not because they were horrifying displays, but because they attracted large crowds of drunks, rowdies and pickpockets. So in the most macabre sense possible, the event of Johnson’s death signified something unique.

Whether Johnson had truly been fairly treated is unclear but the story had reached a fever pitch, its details splashed across newspaper and gossiped about at city taverns.  By the time he stood overlooking the crowd with a rope around his neck, Johnson had become a figure of evil.  After hanging, his body was donated to a medical school.

Civility would soon come to this death field, as avenues and streets along the grid plan were carved out and the area quickly developed. Violence would return to the neighborhood during the Civil War draft riots of 1863. A block away, a witness to the murder, Peter Stuyvesant’s pear tree at 3rd Avenue and 13th street, would stand until 1867 when it was mowed down by a wagon.

A plaque stands in honor of Peter’s pear tree.  No evidence remains of the public execution which occurred just a few yards — and one block — away.

thats my block… several murders took place here in the 19th century. a couple ran a boarding house on the block in 1880s and murdered a tenant, then tried to collect the insurance.

I lived on the block 336 East 13th Street for almost 25+ years, the worst was the telephone company fire that shut down service all over the LES for weeks in 1975

a contemporary account of the Johnson murder investigation and trial in pdf format is available for free download at: http://drop.io/caganer/asset/trial-of-john-johnson-pdf

Now retired, I look back a the New York Telephone Company fire at Second Avenue and 13th st. in 1975 as one of my high lights moments as a telephone technician. It was a disaster inside the building. According to an estimate, there were over 120,000 customers out of service in the area. As I recalled, we worked day and night including week ends to restore service to these subscribers. There were no closets or lockers and we had to carry our tools home. To the company credit, they used all their resources and manpower available on this project. I remember the presence of the N.Y. Press and company big shots when full service was restored. I learned later that a call was made to mayor Abe Beame from the premises announcing the good news. After that, I returned to my regular job at Broadway and 155 st. garage.

All of this history about 13th st and 2nd ave is very interesting. I worked for the NY Telephone Co. in the late 60’s and early 70’s. I often wondered if that building were still there. Working there at that time wasn’t bad. I hope there wasn’t anyone injured.

Hi, I know this is a rather old post but I came across it whilst research come old photographs. I have an album which stats with about 8 images from 1900 taken inside an apartment at 207 2nd Avenue, which is the apartment block on the corner of 13th Street. I’m in the UK and have never been to New York, but it seems that there are a number of people commenting here who are local and might appreciate the pictures. You can find them at http://www.flickr.com/photos/whatsthatpicture/sets/72157632378203622/detail/

I live in 220 E 13th street, literally the next apartment building in the pic on the right side…we’ve experienced some things that make us think that there really are ghosts in the building next to us!