Back when New York was New Amsterdam, it was the domain of the bullheaded, pear-growing, peglegged Peter Stuyvesant, who cleaned up the city and gave us our most important street. Find out why he still matters and why he’s the king of the East Village.

The picture above is of the statue of Peter Stuyvesant, created in 1941 by Gertrude Vanderbilt Whitney (as in the Vanderbilts and the Whitney Museum). Note how its posture and stance cleverly convey Stuyvestant’s stubborn character. (Click the pic to get a closer look at that peg leg.)

The park itself is a beautiful block of greenery lined with old churches and brownstones — and interrupted by 2nd Ave, part of the original design — in the approximate location of the original Stuyvesant family mansion.

Another of the neighborhood’s famous residents is also honored here with a statue nearby and a street named after him — composer Antonin Dvorak, who lived at 327 East 17th Street. 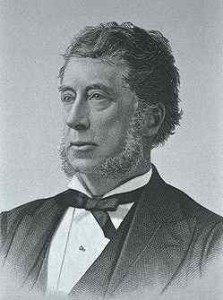 The legacy of Stuyvesant leadership would pass on through the generations. Peter’s great-great-granddaughter Elizabeth took the family in another historically significant direction when she married Revolutionary War hero Nicolas Fish. Their son Hamilton Fish (seen right, named after family friend Alexander Hamilton) would become an influential mayor of New York and later secretary of state under Ulysses S. Grant. Hamilton Fish II, Hamilton Fish III, and Hamilton Fish IV (who died in 1996) would all be New York congressmen. The current Hamilton Fish, we’re up to V I believe, once owned The Nation magazine.

Hamilton I was born in the lovely Stuyvesant-Fish house at 21 Stuyvesant Street. Today its one of the loveliest streets in the East Village. 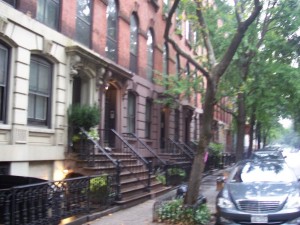 Its odd diagonal through the grid pattern of the Village is a vestige of its original path through Stuyvesant’s old farm. 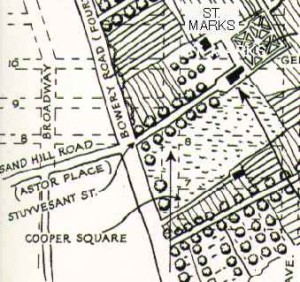 At the end of path, at Second Avenue, is St. Marks-on-the-Bowery, which is aswirl during the weekend with community activities and sometimes a farmer’s market outfront. St Marks contains the crypt of Peter Stuyvesant (marked Petrus Stuyvesant on the stone, to indicate the formalized version of his first name). 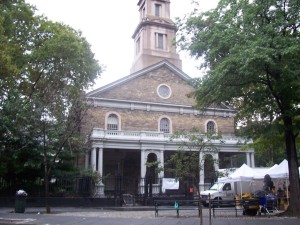 You’ll need to walk a short way to Third Avenue and 13th Street to the plaque honoring the site of Peter’s old pear tree, planted in 1647 from a Dutch seedling, which outlived him by almost two hundred years and drew curiosity seekers from miles around in the mid-19th Century. At the time it was considered the most famous tree in America until it was uprooted by an errant wagon in 1867. (It should be noted that the tree survived the New York Draft Riots, when the neighborhood nearby was in flames.)

Here’s the plaque that hangs in front of Keihl’s. Believe it or not, Keihl’s opened in 1851, the tree standing not far from its doorstep, and John Keihl may have even witnessed the arboreal tragedy. (Click into the picture for a closer look.) 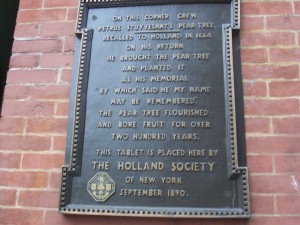 Believe it or not, a slab of the old pear tree can be viewed in the regular collection of the New York Historical Society.

The Stuyvesant family name also pops up in Bedford-Stuyvesant (comprising the Stuyvesant Heights neighborhood), once a cultural mecca for African-Americans, then a former notorious neighborhood — at one time called ‘the world’s biggest ghetto’ — BedStuy has transformed into a ‘hot’ real estate haven, thanks to its many beautiful brownstones. Stuyvesant High School in Battery Park is one of the most revered in the nation (it’s the alumni of several Nobel laureates).