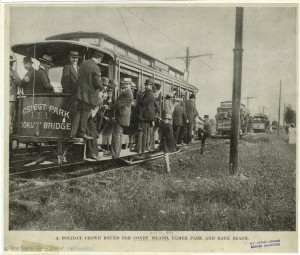 All aboard the train to Coney Island, Ulmer Park and Bath Beach Above pic courtesy NYPL

Next weekend on Coney Island is the annual Siren Festival, sponsored by the Village Voice. Are you going? Believe it or not, over a 100 years ago, there was once a time you could get your beer, music and mayhem at a Brooklyn ‘pleasure park’ just a few stops short of Coney Island — near today’s Bensonhurst neighborhood.

Ulmer Park was the lark of William Ulmer, one of Brooklyn’s most successful brewers in an age where much of the nation’s finest beer was coming from the future borough. The German-born son of a wine merchant who learned the trade from his uncle, Ulmer opened his eponymous brewery in the 1870s at Belvedere Street and soon came upon the idea of opening a park as a way of selling more beer. (Not a bad idea. Jacob Ruppert would have similar designs in mind when he bought the New York Yankees in 1915).

The park would open in 1893 in Gravesend Bay along the southern shore of Brooklyn — back when there was an actual shore — between Coney Island farther south and the more conservative Bath Beach resort community to its west. Ulmer Park seemed to have more in common with Bath Beach — clean, family friendly (keep Dad happy so he keeps drinking!) with a beer garden, carousels and swings, rifle ranges, a dance pavilion and of course plenty of beachfront property.

The park seemed to be particular popular with Germans — Ulmer after all was German, and this was a beer garden — and particularly the annual ‘Saengerfest’ festival. A Times article even claims that 100,000 gathered at Ulmer Park for the end of one such festival.

Below: an illustration of Ulmer Park. Note the grand pier which stuck out into into the bay

We can get a good idea of Ulmer’s intentions for the park by looking at his failure at obtaining a “liquor tax certificate” (or license) in a report from 1900. “A picnic ground, or open air pleasure resort, of about two acres” between Harway Avenue and the shore, the park had a bowling alley, a pier with canopied bar at the end, two or three other beer pavilions scattered throughout the property and a hotel.

Ultimately, neither the resort at Bath Beach nor amusements at Ulmer Park could compete with Coney Island which was about to enter its golden age in the early 1900s; apparently, it was grit and decadence people wanted in their summertime Brooklyn getaways. Ulmer closed in 1899.

The land remained a public space hosting baseball, cricket and track and field events. Eventually it was wiped away and redeveloped. It remains in name only, at the Ulmer Park branch of the Brooklyn Public Library and the name of the neighborhood bus depot.

For your frame of reference, the park was located a couple blocks west of today’s bus depot, located here:

FYI, did you know that Central Park and Prospect Park designer Calvert Vaux drowned “under mysterious circumstances” in 1895 and that his body washed up on shore not too far away from Ulmer Park?

Is the discovery of Vaux’s body in Gravesend Bay the reason that the nearby Dreier-Offerman Park is in the process of being renamed Calvert Vaux Park? That seems like a macabre way of getting your name on a piece of land, especially for a landscape architect.

Yes I think so. I happened to find more information at the blog [Hudson River] http://hudsonriverbracketed.blogspot.com/2005/04/silent-partner-calvert-vaux.html :

Vaux is buried in Kingston’s Montrepose Cemetery, in the same row as Jervis McEntee and other members of their families, even though he died in Bensonhurst, Brooklyn, while visiting his son Bowyer.

He walked off the end of a pier into Gravesend Bay, and while the family maintained he was confused and had left the house on a foggy day to take a walk without bringing along his eyeglasses, the newspapers reported the death as a suicide. From The Brooklyn Eagle of November 21, 1895, the day of the drowning:

“A workman on Fry’s coal dock first saw the body being tossed about in the rough water, but when he rushed to the shore to secure the corpse it disappeared. It was some minutes later before Mr. Fry himself saw it drifting alongside the bulkhead out to sea again. With a boat hook he succeeded in bringing it close to shore…. It was finally necessary for someone to go right in after it…. The son was much affected. He made the identification certain by examining the marks on the clothing, not daring to trust himself to look at the features.”

I’ve got to look more into that!

Sounds like the start of a good Brooklyn murder mystery.

Wow. I’m a native Gravesender and a fan of the local history and this is the first I’ve ever heard of Ulmer Park. Thanks for widening my knowledge base.

I ws born in a little community named Camp City in 1933. I have run across a Donald Fox who also lived in the community. Both of us would like to receive any information at all about Camp City. If you have anything, please feel free to send it to me at rkanenchen@cox.net. Thank you so much. Dick Kanenchen, 3405 kSE 22nd Street, Del City, OK 73115 – 405-672-3650. Will be happy to purchase any photos from that era as long as they are not too expensive.

There were still picnics and social functions staged at Ulmer Park at least as late as 1907, from advertisements of those events that can be found in searches of New York City area newspapers. In one such ad, from 1907, it says that the park still included bowling alleys, a shooting range, and “all the first class accommodations.” So maybe it didn’t close completely in 1899. Or maybe it just changed ownership?

I have a photo of my Grandmother on a tour boat with the title “Ulmer Park” scrawled across the bottom. She was born in 1902 and looks to be 10 or 12 in the photo which would make it about 1912 or 14. She and her two friends are grinning from ear to ear and thoroughly enjoying themselves.

I was born at Camp City, Brooklyn, NY 12 Nov 1932. Yes, the remains of Ulmer Park were still there. In other words, Camp City arose from the close of Ulmer Park.
Camp City was destroyed to allow the Belt Parkway to be constructed, the year we all moved was 1938. A hurricane pushed our departure.
Great memories!
Donald R. Fox

I found a ships log dating back to 1899 – my grandfathers, he was to meet a girl , we think is my first grandmother .Coney Island to Ulmer Park. Unfortunately , he wrote most of this in Finnish-still trying to understand/decode, I may have more family out there–
WILD!!!

Hello ~ My grandfather, Francesco Consolazio, was the Recording Secretary of the Italian Barbers Benevolent Society and I have a huge group photo of their 16th Annual Picnic and Festival at Ulmer Park, dated August 9, 1936.

I was born in 1933 in what was then called Bensonhurst (23rd Ave between Bath and Cropsey) now Bath Beach I guess. When I was about in my early pre-teens we used to go to Ulmer Park for a picnic on occasion. I don’t remember any concessions…just picnic tables and grills.

I’m holding a photo post card that states “POST CARD authorized by Act of congress of May 19, 1898” and though the stamp was removed the postal cancellation stamp says “New York AUG19 11AM” so I don’t know what year it was mailed, maybe 1919? but sometime after 1898. It was addressed to:
Mr. Arthur Knight
Camp City
Ulmer Park
L.I., NY