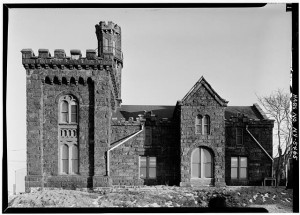 ABOVE Queens Castle: the Bodine Castle once stood in Long Island City at 4316 Vernon Boulevard, a private villa owned by a wealthy banker. The building was unfortunately demolished in 1966. Read more about it here

A bad dream: Lockdown in Coney Island, as ‘Dreamland Park’ is shuttered by developer. [Brooklyn Paper]