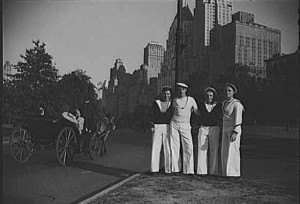 Tres tragique! The CafÃ© des Artistes, a 92 year old staple of the Upper West Side, originally opened as a haven for literally starving artists, closed for good over the weekend. [Eater]

Meanwhile, in Central Park, Tavern On The Green isn’t going away, but the name might be changing. [Newsday]

Grave anniversary: The Battle of Brooklyn is reenacted at Green-Wood Cemetery on its 233rd anniversary. [Ny1]

On the Waterfront: The Museum of City of New York opens The Edge of New York: Waterfront Photographs next Monday. Art Daily presents a preview. [Art Daily]