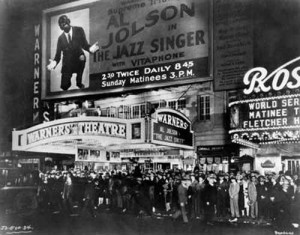 Eighty-two years ago today, The Jazz Singer debuts as Warner’s Theater at 1664 Broadway (at 52nd Street). It was the first film to feature sound in certain parts of the film. New Yorkers would have to wait another year for The Lights of New York, the first all talking picture.

Why October 6th? Yom Kippur that year fell on Oct. 7, a holiday which features prominently in the film.

The theatre where this historic premiere occurred is long, long gone. Built in 1924 (as the Piccadilly Theatre), Warner Brothers bought it for $835,000 the year of Jazz Singer’s release, to use their showcase screen in New York. But the once modern theatre was soon left behind as films became more lavish and technologically sophisticated. It was torn down in 1952.

According to the wise people at Cinema Treasures, the movie house when through numerous names during that time, including the New Yorker, the Oriental, the Abbey, the Continental, the Manhattan and the Republic. 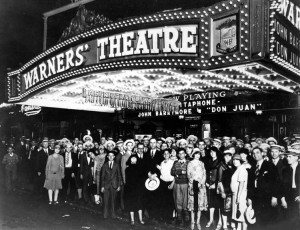