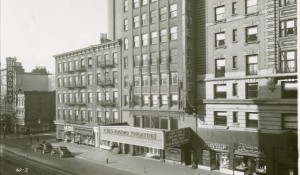 ABOVE: CBS Radio Theater, later known as the Ed Sullivan Theater, home of David Letterman and his scandals (Circa late 1930s, photo by the Wurtz Brothers, courtesy NYPL)

QUEENS: The New York Times ponders the question of New York’s oldest tree. We also pondered the same question a few months ago. The Queen’s Giant is still the victor, but what about that chopped-down Great White Oak? [City Room]

BROOKLYN: The 1973 Park Slope Riot. No, it wasn’t about baby carriages. [Save Park Slope]

BRONX: The fabulous story of Fonthill, fairytale castle in the Bronx, owned by one of the greatest actors of the 19th century, Edwin Forrest [Virtual Dime Museum]

1 reply on “History in the Making: Trees and Castles Edition”

Thank you so much for the link! I look forward to reading the other links too.