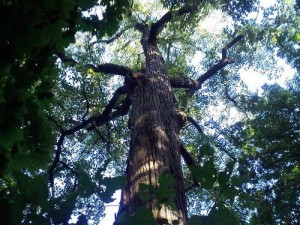 Say hello to the Giant, the largest living thing in New York City

This week, I’m looking at the oldest things New York City has to offer, by borough. Today’s subject happens to be the very oldest living residents of the city, the trees of New York City. These would be those trees that have not been transplanted from elsewhere — that would give the botanical gardens of New York an unfair advantage — plants that have stood right where they were since the earliest days of Dutch and British occupancy — and in one case, even before then.

I was not able to find complete info for all five boroughs, and I will indicate where I could not come to a definitive answer. If you have any leads, please post them in the comments section.

I’m obviously no arborist, so the details below are based on the research of others. However maybe someday I’ll trek out to these various sites armed with a tape measure and an layman’s knowledge on how to evaluate tree age. 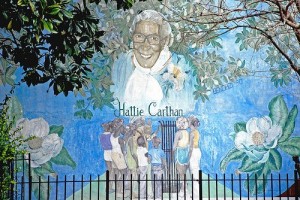 BROOKLYN
It appears that the oldest tree in the borough — among, as Betty Smith well knows, the many, many trees that grow in Brooklyn — is undetermined. I read one assertion that the oldest tree was near Macdougal and Rockaway Ave in Bed-Stuy, but I’ve been to that corner and I don’t know which tree that could possibly be.

However, one of Brooklyn’s most famous trees is very nearby — a southern magnolia tree Magnolia Grandiflora, brought to Brooklyn from North Carolina in 1885 and located near 667 Lafayette St. It happens to be the only landmarked living tree in the city, thanks to community leader and nature lover Hattie Carthan, back in 1970.

Most likely, however, the candidate for oldest tree is living in Prospect Park, one of 30,000 trees in notably the last remaining natural forest in the borough. Formerly, the title holder was a 220-year old black oak; it was recently uprooted during a storm and tumbled into the ravine.

BRONX
With the borough’s thousands of acres of park land, the real candidate for borough’s oldest may as yet be undiscovered. However, the leading candidate is currently a handsome white oak tree around the 18th hole of the Split Rock Golf Course in Pelham Bay Park. The oak is well ‘over 200 years old’ although its location by a golf course can’t be good for its health. 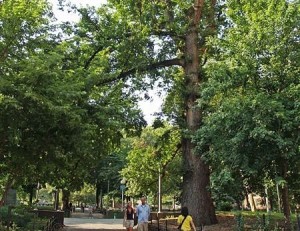 Hangin’ around with New York’s oldest and most legendary elm

MANHATTAN
One might naturally assume Manhattan’s oldest tree must be in Central Park. It’s a very manicured place though, and most of its older vegetation was transplanted here. However, the great London plane tree near the Reservoir (pictured below) is said possibly pre-date its construction in 1862.

There are two other candidates for oldest tree on the island. One is in Washington Heights, a 110-foot elm at 163rd Street and St. Nicholas. Known as the Dinosaur, it reportedly shaded George Washington as he surveyed his shifting fortunes during the Battle of Washington Heights.

The most renown candidate is, of course, the Hangman’s Elm, in Washington Square Park. At a reported 310 years old, this arboreal old man in the northwest corner of the park most likely never really saw any hangings as its legend indicates, but its certainly fun to morbidly gander at its branches.

The top two candidates for New York’s oldest tree have been the fascination of tree lovers since their discovery. 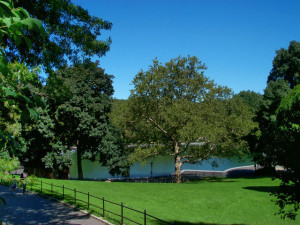 STATEN ISLAND
The two oldest trees in New York happen to be tulip trees, a common tree of the region named for its flower-shaped leaves. The charming Clove Lakes Park, at Forest Avenue and Clove Road, takes its name from the Dutch word “kloven” or cleft. Its granddaddy entry into the tree race is known as the Clove Lakes Colossus is a monstrous 119 feet tall with a circumference of 21.4 feet.

It’s reported to be well over 300 years old, predating all but the most rudimentary European settlement here in Staten Island. It’s actually a thicker tree than the tulip which is New York’s oldest, but that’s due to more ideal growing conditions. Unlike many other ‘oldest tree’ candidates, Clove Lakes takes good care of its elders, easily located at the park’s north end near a paved path. 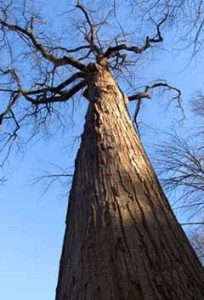 QUEENS
Say hello to the Queens Giant (pictured at top), the grandmother of all native New York City plants. Located along a secluded trail in Queens’ Alley Pond Park, this monster is also one of the city’s tallest trees at 133.8 feet — just 20 feet shorter than the Statue of Liberty.

It may be one of the few remaining living things from the era before Henry Hudson sailed into New York harbor, with its age calculated at anywhere from 350 to 450 years old. This would make it one of New York’s truly extraordinary natural features. Interestingly, in the past, the city has taken a stance of ‘benign neglect‘ to the tree, arguing that it shouldn’t be better accessed in order to protect it.

9 replies on “Where are New York City’s oldest living trees?”

Awesome trees! I’m surprised no one found a resaon to cut them down and put up a development! http://www.satisfiedsole.com

I found you after googling ‘oldest living tree Pelham Bay Park’. I believe I found the oldest in all NYC-a MONSTER in the woods of Pelham Bay Park-the lower branches are as big around as most trees-and are dead. Upper branches thriving with leaves. Drop me an email and I’ll send pics. Best rgds, Bruce-Riverdale Bronx

Bruce…I am a Bronx native who has seen and wondered about this tree. I would love to know more about it. Anything you can add would be appreciated.

Bruce…I am a Bronx native who has seen and wondered about this tree. I would love to know more about it. Anything you can add would be appreciated.

Thank you for an enjoyable reading. Just wondering…if anyone happens to know….which is THE RAREST tree in New York City?

I live in Brooklyn I just seen a tree that has to be the oldest tree i ever seen has to be at least 300 to 400 years old, in Bergen Beach Brooklyn. I wish I could do something to protect this tree from future damage. This tree is real ancient.

The Split Rock Tree (White Oak in the Bronx) did not survive Hurricane Sandy. Workers within NYC’s own Parks Department estimated the tree to be over 400 years old. It is sad to see it not make it through the storm. I think the statement that the tree is on a golf course which means it is not good for its health is absolutely ignorant. Many golf course workers went above and beyond to protect the well being of this tree and if it was not for their efforts I am sure this tree would have been down years ago. Hopefully Parks will fund an analysis of the tree’s true age.

Thanks for this comment I was literally scouring the internet trying to find the 18th hole to go check out the tree. Sad I missed the opportunity living here my whole life.

I live in bay ridge Brooklyn. We have a Tulip tree in our backyard that we had heard was approx two hundred years old. It is so strauIght and around 150 feet tall. It lost about forty feet when a tornado passed thru a few years ago. How can we find out how old it is. Would take about three men to hold hands taround it to measure. Really curious.