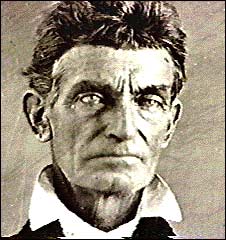 Today is the 150th anniversary of the raid on Harpers Ferry in West Virginia by radical abolitionist John Brown (at left), a failed attempt to free slaves and start a revolution. I recently found this article outlining John Brown’s various visits to New York City. Most notably, Brown met one of his lieutenants here, Hugh Forbes, who fought beside the failed Italian revolutionary Garibaldi.

Brown would often come to Manhattan to visit his son John Brown Jr, who apprenticed at the townhouse office of Fowler & Wells at 131 Nassau Street, near City Hall. (Find a picture of their later office at 27 East 21st Street here.)

What exactly was Fowler & Wells? They were practitioners in the antiquated art of phrenology, an actual 19th century science that gauged a person’s brain capacity, personality and potential based on the size and shape of their skull.

According to the Kings Handbook of New York, the offices of Fowler & Wells featured various phrenology parlors and a lecture room populated with “the casts of heads of people who have been prominent in many ways over the years; also, skulls from many nations and tribes, as well as animal crania, illustrative of phrenology, and constituting a free public museum, and material for instruction in the institute.”

Its founders Orson and Lorenzo Fowler popularized the pseudo-science writing various tomes on the subject like Matrimony, or Phrenology Applied to the Selection of Companions and Phrenology Proved, Illustrated and Applied.

John Brown Sr. actually got his head examined — literally — by Orson Fowler in 1847. His diagnosis? “You have a pretty good opinion of yourself. You might be persuaded but to drive you would be impossible.”

Below: A picture of Lornezo seated in his New York office 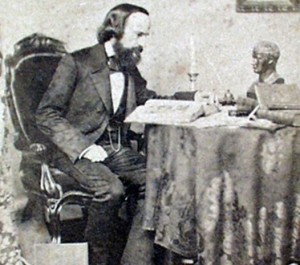