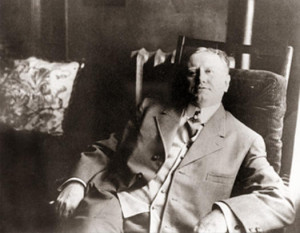 New York City has a fine, macabre tradition of harboring famous artists, writers, musicians and actors on the cusp of an alcohol or drug-fueled demise. The city naturally attracts the creative, oddballs and innovators looking for like minds amid the flourishing artistic communities of the city. Many of these also tragically detoured into the city’s equally impressive collection of taverns, saloons, opium dens, speakeasies, nightclubs, coke dens and crackhouses.

Countless have drank and drugged themselves to ruin in the city’s 400-year history, either unintentionally or with suicidal design. If you’re looking to pinpoint the first major instance of this trend among the major icons of American history, look back in New York City history exactly one hundred years ago to the death of one of this country’s most iconic writers, O. Henry.

Henry (real name William Sydney Porter) is not the first American writer to die of the effects of alcoholism. Probably the most infamous was one-time New Yorker Edgar Allen Poe, who died in a Baltimore gutter in 1849. I’m not even going to claim that O. Henry was even the first notable alcoholic death in New York City. For instance, Jewish poet Naphtali Herz Imber collapsed and died in the Lower East Side from an alcohol binge in 1909.

But O. Henry was an undisputed American star at the time of his death, one of the country’s most famous writers and the pioneer of the short story. Artists at the height of their success in 1910 do not die of alcohol abuse, at least officially. In fact, his death by cirrhosis on June 5, 1910, is heavily glossed over in contemporary sources.

Porter first became O. Henry in 1899, in an article for McClure’s Magazine. It should be noted he wrote that particular story while in an Ohio prison, serving a five year stint for embezzlement. He moved to New York City in 1902 where he flourished, writing hundreds of stories and becoming America’s most prolific and most popular writers.

Many of his stories are set in New York, although his popular ‘The Ransom of Red Chief’ (one of favorite stories as a kid) is a kidnapping yarn that takes place in Alabama. Probably his most famous tale, the 1906 ‘Gift of the Magi’, was written, according to legend, at Pete’s Tavern near Gramercy Park.

So yes, like many writers, Porter wrote and drank, both prolifically and magnificently. In fact, he kept drinking even though his body began deteriorating from the effects of cirrhosis and diabetes.

On June 3, 1910, Porter collapsed after writing a letter and was taken to the New York Polyclinic Hospital at 218 East 34th Street (today near the entrance of the Queens Midtown Tunnel), checking in under a false name to throw off the newspaper reporters. He died two days later, his last words reportedly, “Turn up the lights. I don’t want to go home in the dark.”

Biographies of the day barely mentioned Porter’s drinking problem and the cirrhosis which killed him. The writer was buried in Asheville, NC, the hometown of his wife Sara.

“It couldn’t have happened anywhere but in little old New York.” — O. Henry

2 replies on “100 Years Ago: Celebrity writer drinks himself to death”

I remember hearing about him asking not to die in the dark. Sad. The reading of “The Gift of the Magi” is a holiday tradition at the manor.

I have read and studied the ironic form that distinguished his writings from any others. O’Henry wrote at a time when he transcended the insignificant person of the street and elevated him to a place of prominence and for this alone he will be remembered not for the insufficencies in his own life but because he recognized them in others. People leave their marks and our O’Henry certainly left his.