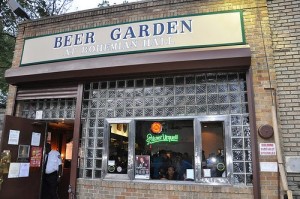 How about a story on the positive effects of alcohol on New Yorkers? This year is the 100th anniversary of the city’s oldest beer garden, Bohemian Hall, an understated, well-worn treasure in Astoria, Queens, which belies its importance to the borough’s Czech community. It may also be the only place in the New York City that sells liquor in the same building as a school.

These aren’t bohemians of the floaty literary 19th–Century (or 60s groovy) stripe, but an actual culture who trace their lineage to the sizable region of Bohemia, located in the modern Czech Republic today. Sandwiched between the Bohemian Forest and the Ore Mountains, this ancient area of Central Europe was part of the Austro-Hungarian empire and would, later in the 20th century, become the heart of the newly formed Czechoslovakia.

In 1910, New York City is at the tail end of the massive immigration boom hurtling through Ellis Island, with 6 million people processed through the center in the prior decade. Bohemians were among the great throng of new Americans, although not at a rate comparable with other nationalities. According to the US Census, by 1910, 200,000 first generation Czechs lived in the United States, up from about 10,000 total in the 1850s.

There was a sizable Czech community in New York during the late 19th century; one source claims that almost 95 percent of Czech working adults and children were employed in the cigar business. “The factories in the regions of Seventieth street, New York, are filled with Bohemian women and girls employed in the making of cigars,” according to Jane Robbins.

Like other national groups, the Czechs and Slovaks of New York had their own support groups and newspapers (the first two: New Yorske Listy, founded in 1879 and Slovak v Amerike, in 1889) and developed small enclaves throughout the city, including the old Czech neighborhood in Manhattan’s Upper East Side in Yorkville and out in Astoria, among others.

It was in Astoria in 1892 that the Bohemian Citizens’ Benevolent Society was formed to help the transition for new immigrants and provide a community bond for everybody else. In fact, the society is still around today, with purposes that certainly sound very similar to old objectives: “to encourage, support and maintain Schools, Dramatics, Lectures and Libraries for Czech and Slovak children …. [and] to maintain a nonprofit making social home for people of Czech and Slovak ancestry, in which the Czech and Slovak culture may be taught and blended with American traditions and culture, thereby tending to make the members better Americans.”

By 1910, the society would raise funds to open a community center and buy up some available lots in Astoria, some on former farmland. The cornerstone for the modest brick Bohemian Hall was laid October 1, 1910, and the original building swiftly constructed by volunteers in the community.

Selling beer was merely one function of the new building; a meeting hall was constructed soon after, hosting political functions and family functions, and by 1919 an outdoor seating area was completed, in the style of many German outdoor drinking and eating located throughout the city for years. The Society’s enthusiasm to capture the beer garden spirit was felled only by the coming of Prohibition. When legal drinking returned, the Hall in 1933 received a new fence to wrap out the vast yard (200-by-125 feet) and some scattered linden trees, the national tree of the Czechs.

The Hall was more than a place to toss back a few Pilsner Urqells. The Hall provided (and, in fact, still provides) Czech and Slovak language courses specifically for children and once even offered Sokol gymnastic courses, essentially an old-school form of calisthenics dating back to 1862.

Time has pretty much stopped at Bohemian Hall; like any bar, televisions have been added and the patrons are young locals and beer lovers, but I imagine that the vibe is almost identical to what it might have been like 70-80 years ago. Like McSorley’s Old Ale House, the focus is beer — all day, every day — but bolstered with a menu of traditional dishes and (during the summer) barbecue.

In a city were beer gardens once flourished — thanks to the millions of Germans and German-Americans who have lived and worked here — Bohemian Hall is now the last remaining vestige. (Obviously there are many brand-new beer gardens scattered throughout today.)

For some more information on Bohemians, Chechs and Slovaks in New York, check out the blog Slavs of New York. Bohemian Hall’s official website has more information about their hours and other services.

Located at 29-19 24th Avenue in Astoria, Queens, right off the Triborough Bridge

2 replies on “100 Years Ago: Beer, tradition and the new Bohemians”

There are no more sublime moments than those to be had on a summer afternoon at the Bohemian Beer Garden.

I have been to that beer garden once. It’s really a cool place to hang out.