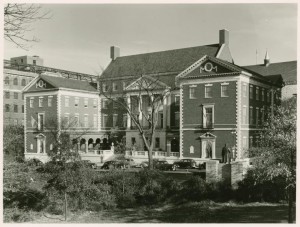 The Museum of the City of New York building, circa 1940s, photography by Wurts Brothers (courtesy NYPL)

Free art: The institutions along Museum Mile are free today at 6 pm. Go early: the crowds are notoriously insane. Definitely check out the Museum of the City of New York, including its exhibit on the quirky art stylings of Charles Addams. [Museum Mile Festival]

Fire brand: An interesting take of the fire that burned down P.T. Barnum’s American Museum, featuring the recollections of the rector across the street at St. Paul’s Chapel and the American spy who may have helped put out the blaze. [Trinity Wall Street]

Speculation: Was New York prostitute Carrie Brown a victim of Jack the Ripper? [Murder By Gaslight]

Not a sinkhole: It’s an archaeological dig at City Hall, peering into the area’s early history as a place for almshouses. [City Room]

Out of tune: There may be an art exhibit held in one of the old (and unlandmarked) buildnigs of Tin Pan Alley on June 10 — if the landlord doesn’t shut it down. [Lost New York]