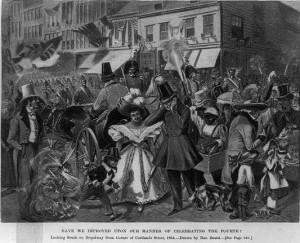 The caption for the above 1894 illustration, looking back to headier days, reads: “Have we improved upon our manner of celebrating the Fourth? looking south on Broadway from corner of Cortlandt Street, 1834.” Here’s that view today; simply replace those buildings with Liberty Plaza.

The proper classes agonized over New York’s Fourth of July celebrations for decades, associating public holiday gathering as opportunities for crime, debauchery and behaviors unbecoming the populace of a world class city.

Ninety nine years ago on July 4th, 1911, Tammany Hall decided to counter program, with a day of “more oratory than ever before; more brass band music; more red, white, and blue decorations,” all to be held at their headquarters right off of Union Square.

It appeared to be mostly a day of lectures on American patriotism by a litany of politicians, certainly something to appease and interest crowds on a hot day in these times before microphones and speakers. The keynote speaker was Manuel Luis Quezon, much later to become the president of the Philippines during the U.S. occupation of that nation.

According to the Times: “the cool shade of the Wigwam’s basement will be open and all invited to partake of good things to eat, while the thirsty will have iced watermelon and other wet things that do not have to be chewed.” Party time!

By the way, since we’re talking 1911, I noticed that the Edison Company produced a short film that year called ‘A Sane Fourth of July’ featuring New York City characters including the ‘Mayor of the City’. Mostly likely this film was produced at Edison’s film studio on Decatur Avenue in the Bronx. Earlier in the year, that same studio made the first film adaptation of ‘Frankenstein’. 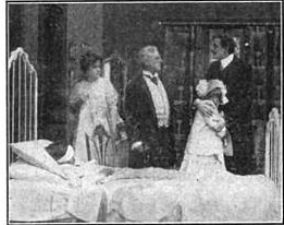 ‘A Sane Fourth of July’ was a morality story, lecturing against ‘the barbarous customs of the old-fashioned Fourth’. A widowed woman appeals to the mayor of New York to repeal the sale of fireworks in the city, but he rebuffs her under advisement of his cronies. As a result, both the widow’s son and the mayor’s daughter are injured in fireworks accidents, occurring just minutes later. (The daughter actually gets lockjaw.) Fascinating plot. Why hasn’t this been remade?

At left: A scene from the 99-year-old ‘A Sane Fourth of July’
We wish you all a great, sane Fourth of July, full of oratory and iced watermelon, and we’ll be back here with new postings on July 6th and a brand new podcast on July 9th.