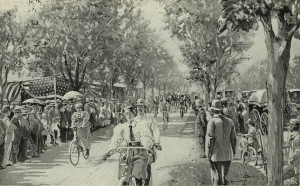 “The bicycle path from Prospect Park, Brooklyn, to Coney Island.” Illustration above an 1896 issue of Munsey’s magazine (Courtesy NYPL)

You have been warned! From an article in the Brooklyn Daily Eagle, dated May 11, 1896:

“Several thousand men and women rode on bicycles in this neighborhood yesterday. Possibly twenty of them were injured in one way or another. It is known that one died from heart disease. Physicians have cautioned men with weak hearts against bicycling.

Mr. Coe of Quincy Street thought that his heart was strong enough to ride. But he was mistaken. The heat and the exertion were too much for him and he was taken home dead in an ambulance. Another man who was run over by a grocer’s wagon in New York on Saturday evening died in a hospital. His friends had warned him of the danger of wheeling. But he had not heeded them…..”

Better yet, the article continues, best not to even leave your house!

“It would not be true to say that there is no danger in wheeling. It is not possible for a man to stir out of his house without exposing himself to danger. The chances in one’s favor are so great that one seldom thinks of the risk that he takes in the street. Horses run away, buildings fall down, mad dogs rush through the street, lunatics explode firearms, trolley cars run away, manhole covers blow off, trolley wires break, bolts fall from the elevated railroad structure and a thousand and one other things happen which injure and kill people.

The man who suffers from any of these things could not have escaped, on a wheel or on foot. The wheelman is exposed to them the same as every other person. the only accident which is peculiar to wheelmen is that caused by a breakdown of his wheel.”

Other things that Brooklyn cyclists had to deal with: ghosts

1 reply on “Brooklyn residents, beware the dangers of ‘the wheel’!”

The average pedestrian should stay home. The possibility that you can get run over by eco-friendly bicycle geeks is greater than getting plowed by a PT Cruiser.