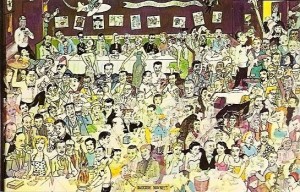 A postcard from Jim Downey’s showing a plethora of theatrical faces who frequented the place.

There were two long-gone destinations used in last night’s episode of ‘Mad Men’ to delineate the old and the new, contrasting the square with the hip.

Two former ad rivals Pete Campbell and Ken Cosgrove bury the hatchet over a meal at Jim Downey’s Steak House, a dapper theater-district hangout at 705 Eighth Avenue (at 44th Street), started in the late 1950s by an Irish immigrant who won big at the horse races one day and decided to open a restaurant (as the legend goes).

Downey’s, very much in the mold of classic midtown eateries like Sardi’s and Toot Shor’s, was considered more a destination for theater crowds than the professional set, so much so that its dining rooms had theatrical names (like the Backstage Room) and you could frequently find a theater star or two having Irish coffees at the bar, possibly standing by writer Brendan Behan, also a regular. Dustin Hoffman and Robert Duvall sat at a booth very much like the one depicted on the show, discussing women and literature.

The restaurant was closed by the early ’80s, taken over by a Cajun restaurant, although Downey’s sons opened steak houses in other parts of the city.

Meanwhile, Peggy Olsen got herself invited to a happening, or rather, an “I don’t even know what to call it” at old Washington Market (pictured below), the once lively indoor marketplace downtown. By 1956, however, the vendors — at one time, over 800 of them — had moved out (most up to the Hunts Point in the Bronx) and the forlorn shell of the building sat abandoned. It was eventually ripped down in 1967 to build the World Trade Center. 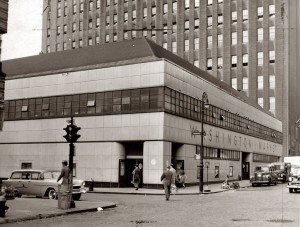 Downey’s was also a favorite hangout of Robert Morse, Charles Nelson Reilly, and Vincent Gardenia back in the early 60s…so sad it closed down.

I heard Robert Morse speak fondly of Downey’s. He and Charles Nelson Reilly used to frequent Downey’s after performances of How to Succeed…so sad that it closed down.

Hi there,
Do you happen to have any photo’s of the inside when dining there. This was my husband’s grandfather’s restaurant and we have no photos of it.

Jim Downey is my husband’s grandfather. His dad Archie used to bartend there and his uncle ran the kitchen. Archie has told how his dad did win on the horse race.