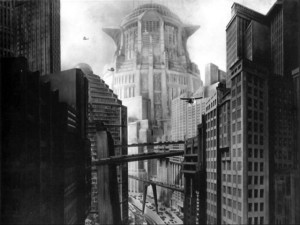 The giant screen at the Ziegfeld Theatre goes silent this Friday as a two-week run of Fritz Lang’s fantasy masterpiece ‘Metropolis’ opens, featuring the famously restored print — with 30 minutes of newly integrated footage — that presents the most complete version of the movie ever screened in the city. This version originally debuted at the Film Forum back in May, but the Ziegfeld’s massive screen — the largest in the city — and classic cinema setting should make this an unforgettable event.

The Ziegfeld seats a little over 1,100 people. The film made its New York debut on March 3, 1927 on a much bigger screen, the Rialto, on the northwest corner of 42nd Street and Broadway, which could accommodate over 1,900 filmgoers at one time. (And that was considered a medium-sized theater for its day.) In the days when single films toured to various cities in succession, ‘Metropolis’ was a bonafide box office favorite for New Yorkers, raking in just over $150,000 during a six week run, back when the price of movie tickets ranged from 30 to 90 cents. Below: the Rialto Theatre in 1917 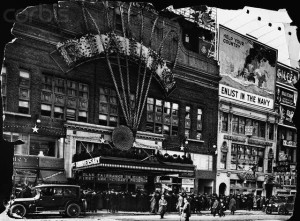 What was shown to audiences in 1927 would have made cineastes wither with shame, a “butchered, disjointed ” version released by Paramount Pictures, with whole reels of the film discarded, “16 reels to 7, resulting in a plot with ‘more holes than a pound of rigatoni.'” (Cesar J. Rotondi).” [source] In place of those reels were a couple shorts, including a scenic documentary called ‘Steamer Day’.

The version of ‘Metropolis’ being shown at the Ziegfeld is the truest to the filmmaker’s original vision. And a perfect home for it, too, as Lang had always claimed that the film was inspired by a journey to New York. On October 12 1924, while being kept in the harbor aboard the vessel SS Deutschland awaiting entry, Lang caught sight of the city skyline for the first time, “completely new and fairy-tale like for a European. I knew then that I had to make a film about all of these sensations.”

As production on ‘Metropolis’ began just five months later, however, there were undoubtedly other inspirations before Manhattan, and many film historians believe Lang told of his New York inspiration as a way to promote the movie.

New York critics were all over the map in their appreciation. “There is altogether too much of Metropolis…too much scenery, too many people, too much plot and too many platitudinous ideas,” proclaimed the critic from Life Magazine. Mordaunt Hall of the New York Times was kinder: “Nothing like “Metropolis” has been seen on the screen. It, therefore, stands alone, in some respects, as a remarkable achievement.” Before adding, “It is a technical marvel with feet of clay, a picture as soulless as the manufactured woman of its story.” (They were watching the heavily edited version, so we’ll give them a pass.)

The film had left New York by May 1927 — the era of sound movies would come that summer with ‘The Jazz Singer’ — but it left one spiritual mark on the city: three years later, architect William Van Alen pays the film a subconscious nod when the spire of the Chrysler Building is raised May 20, 1930.

I saw the restored Metropolis at Belcourt Theater in Nashville a couple weekends ago with the Alloy Orchestra providing a live score. It was glorious. The print of the film is stunning.