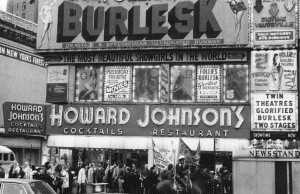 Howard Johnson at 46th Street: Dinner and a movie, all in one corner! There’s even Vietnam war protesters outside. (Photo by Bob Gruen, taken 1972, courtesy Ephemeral New York)

I was disappointed with last night’s season finale of Mad Men, not because of the out-of-nowhere shenanigans of Don Draper, but because a full half of the show took place in Los Angeles, leaving precious little opportunity for historical references. In fact, the two big references were L.A. originals, Disneyland and Whisky-a-Go-Go, which would have been only a year old in 1965.

But thankfully there was a brief mention (via Peggy’s hipster friend Joyce) of a treasured Times Square staple, and a place that most New Yorkers think of with great fondness — the Howard Johnsons restaurant at 46th and Broadway.

Nowhere on the planet could you find a more delicious plate of cheese fries or a dirtier martini. It stood for many years as the last remaining relics of the Times Square’s transitional period between glitz and grit, a stubborn throwback of authentic diner glamour. When it closed in 2005 — replaced with an American Eagle Outfitters — I’m was shocked that Time Square didn’t cave in on itself, as though HoJo’s and its greasy, glorious food were all that was holding it in place.

By the 1950s, the chain of hotels and restaurants founded by Massachusetts entrepreneur Howard Deering Johnson had spread throughout the United States, providing hearty and wholesome sustenance to mainstream, middle-class Americans. It was as ubiquitous and as recognizable with its orange roofs and friendly signage as McDonalds. So much so that Time Square alone had three of them, the first here at 49th and Broadway, a hole in the wall that had once employed up-and-coming actors Lily Tomlin and Gene Hackman. The HoJos here at 46th and Broadway, surviving the others, opened in 1955.

And all the while, the Howard Johnsons below it retained its glittered-tile elegance, refusing to update their signs or menus. In the 1980s, it was an ideal spot to watch theater-goers and prostitutes. Penn Gillete (of Penn and Teller fame) had Friday night meet-ups here before heading off with a crowd for a weekly midnight movie screening.

In the ’90s, the now beaten but still thriving diner stood in contrast to the changing fortunes of Times Square, dwarfed by the multi-million dollar makeover. Eventually its corner real estate became too valuable for it to survive and it closed in 2005 — one of the last Howard Johnson’s restaurants in America. I miss it very much.

HoJoLand has a lovely tribute — full of photographs — of several former New York HoJos, including the Times Square locations.

ALSO: You might have heard a character mention the name Abe Beame, the city comptroller who ran for mayor in 1965, losing to John Lindsay (who’s also been name dropped on the show). Abe of course would get his chance to rule New York nine years later.

That’s it for Mad Men this year. Please go here if you’d like to go back and read prior articles based on references made on the show.

For 12 years in the late 1970-80’s I lived on 46th St.off 6th Ave.
My roommate’s grandfather owned that Howard Johnsons’s and as art students we were able to go there for free meals.
Times Square hasn’t been the same for a long time and the building I lived in is now a pile of rubble but the memory of that HoJo’s
holds a certain warm spot in my heart.