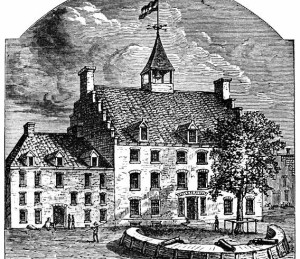 Lovelace’s Tavern is assumably the building to the left, with the Stadt Huys the main structure at center. You can find the foundations of this building still hanging out on Stone Street.
FRIDAY NIGHT FEVER To get you in the mood for the weekend, on occasional Fridays we’ll be featuring an old New York nightlife haunt, from the dance halls of 19th Century Bowery, to the massive warehouse clubs of the mid-1990s. Past entries can be found here.

If you’re a wanderer like I am, you’ve walked by Lovelace’s Tavern many times. People regularly walk on it; investment bankers take smoking breaks nearby it. It’s about 100 feet from the more famous Fraunces Tavern and just a block from the Alexander Hamilton Custom House. It’s history under glass, underfoot, remains trapped in a dusty cavity, the intervening eras heaped above it.

When Lovelace’s opened its doors in 1670, the Custom House was a fort and Fraunces was the home to the first mayor of new York, Stephanus van Cortlandt. The city extended a few blocks north, then abruptly stopped at a earthen wall fortified with timber planks 15 feet in height. The tallest building in New York in 1670 was next door to Lovelace’s — all of five or six floors.

All that remains of the tavern of Governor Lovelace today are a few foundation walls set underfoot outside the former Goldman Sachs headquarters at 85 Broad Street. A rather unsightly office tower, 85 Broad Street was built during the glamour of the 1980s financial boom, a brown monolith of “inconspicuous plainness” that hovers above historic Stone Street. They’ve traced a path through the lobby so you can see where Stone Street used to linger before they planted this building here.

If wasn’t for Goldman Sachs, of course, nobody would have ever found Lovelace’s Tavern, whose foundations were unearthed in 1979 during construction. With a little imagination, you can rebuild it in your mind and refit it among the other historical recreations along Pearl and Stone streets.

The Stadt Huys was the center of New Amsterdam’s civic life — its municipal structure, its meeting hall, its sturdy town center. Built as a tavern in 1641, Peter Stuyvesant transformed it into the young settlement’s city hall, but kept it as a place to serve alcohol, all the while restricting many others in New Amsterdam from doing so. 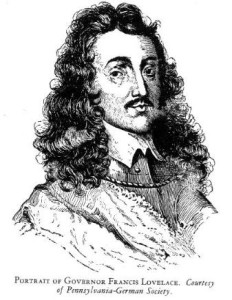 When the British took over in 1664, the building kept its place of importance. Underscoring is position was the building to the southwest that was erected in 1670, a tavern (“an inn, or ordinary“)owned by the governor of New York, Colonel Francis Lovelace (at right).

Francis was in good with the Duke of York during his territorial expansion of the New World and was installed in 1668 as the second governor of the recently acquired New York after the first (Richard Nicolls) was recalled.

Built right next door to the aging Stadt Huys, Lovelace’s tavern may have always been conceived as a second-tier administration building and seemed to offer the same services as the larger building. (It’s sometimes referred to as the King’s House.) In fact, the tavern connected right into municipal chambers, effectually an annex. Even so, the halls of the tavern would be illuminated until late at night with revelers, drinking wine and smoking their pipes.

This was the first of many changes made under Lovelace’s watch. He inaugurated the first postal service to Boston; its first route would become the basis for so many major thoroughfares today, most notably the Bowery. He also strengthened New York as a merchant hub, forcing farmers from surrounding areas to funnel their product through the city, and giving New York merchants a virtual monopoly of posts along the entire Hudson River. 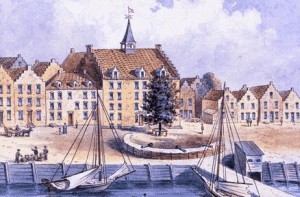 At right: Another depiction of Stadt Huys and Lovelace’s Tavern from a few years later. The tavern also played host to most of the prominent leaders in town. Perhaps even ole Stuyvesant dragged his pegleg along its floors; he did, after all, live on a large farm north of the city and was alive during the tavern’s first two years of operation.

Lovelace, unfortunately, would be dead in a few years. During the short period when the Dutch regained control of New York — from August 1673 to December 1674 — Lovelace was recalled to England and squarely blamed for the loss. He was thrown in the Tower of London and died there in 1675.

But the tavern bearing his name lived on, even incorporating nearly all official New York business for a short time in 1697 when the first structure was deemed too decrepit to continue in. (An official city hall was finally built in 1700 where the city wall once stood.) The tavern burned down in 1706 and the land re-allotted for the growing merchant district.

Below: the remnants of Lovelace’s, in the shadow of 85 Broad Street 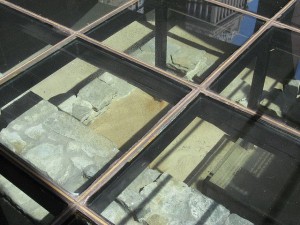