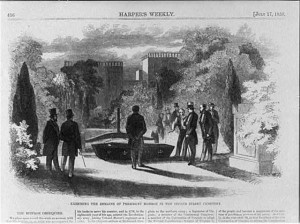 Above: President James Monroe laid to the rest at the New York City Marble Cemetery in 1831.

I hope many of you hit some of the Open House events throughout the city this weekend. Both the New York Marble Cemetery and the New York City Marble Cemetery were open to the public, both areas calm, quiet respites featuring the burial chambers of some early prominent New Yorkers. The similarly named resting places are a block away from each other in the East Village.

The less manicured New York Marble Cemetery is the oldest, dating from 1830, and includes the burial chamber of former mayor Aaron Clark . However the New York City Marble Cemetery, which opened one year later, is bit more aesthetically maintained and was once the final resting place of President James Monroe (before they moved him to Virginia), not to mention two mayors, Marinus Willett and Stephen Allen.

And of course, it was also home to a large cache of C-4 explosives!