A small cemetery for African slaves and free black New Yorkers developed along the southern edge of Collect Pond. But when that filthy body of water was drained and filled, the burial ground disappeared underground with it. (Image courtesy Preserve America)

PODCAST During the construction of a downtown federal administration building, an extraordinary find was discovered — the remnants of a burial ground used by African slaves during the 18th Century.

In the earliest days of New Amsterdam, the first Africans were brought against their will to build the new Dutch port, slaves for a city that would be built upon their backs. Later, forced to repress the cultural expressions of their forefathers, the early black population of British New York did preserve their heritage in the form of burial rites, in a small ‘Negro Burial Ground’ to the south of Collect Pond (and just a couple short blocks to today’s City Hall).

The African Burial Ground monument, at street level. Designed by Rodney Leon, the monument in contained on a quiet patch of land that seems to escape the bustle of the city around it. 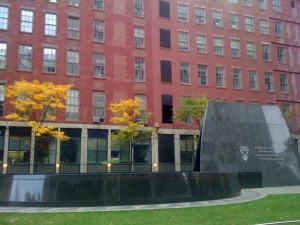 Within the ‘Circle of Diaspora’ are various spiritual and religious symbols, many quite exotic. 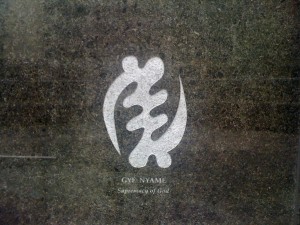 There’s no shortage of information about the history of slavery in New York. I would definite start with the materials related to the New York Historical Society’s extraordinary show from a few years ago. The GSA’s site on the African Burial Ground is a treasure trove of information as well.

For hours and directions, check out the National Park Service, not only for the Burial Ground, but New York’s many other national monuments.

2 replies on “African Burial Ground: History from underneath the city, and the secret tale of New Yorkers once forgotten”

Around the time it was discovered, I was in the Rose reading room with a copy of Gray’s New York, and 1860 book the library unwisely would just hand to you on request. The burial ground was mentioned, with the specific passage the cemetery was paved over for a parking lot (I assume for carriages). I was struck by how it was a conscious effort. Sadly, Gray’s isn’t available at the library. I’m hoping Google will scan it or someone can make it available again

Have to see this now! That heart-shaped symbol at the entrance looks like a simplified version of the voudou vévé for Ezulie, a love goddess in the modern practice. I have a feeling some of the ‘old’ and ‘obscure’ symbols are very similar to modern voudou symbols still used in rituals today. Thanks for sharing Greg! http://en.wikipedia.org/wiki/Veve