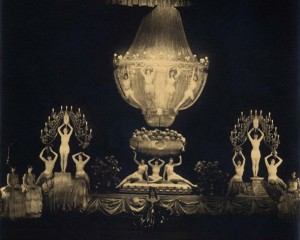 An exotic tableau from the Ziegfeld Follies. The presentations by Burton in the mid-19th century would have been less ornate, but certainly more tantalizing. (photo source)

The sexual appetites of New Yorkers in the pre-Victorian era would sometimes manifest themselves in peculiar ways. Let me take you back to the 1840s, when raunch and salacious behavior infiltrated the Bowery theater scene, and even respectable downtown playhouses like the Park Theater cordoned off the third tier for encounters with prostitutes. A statesman of the time, Francis Grund, complained: “[F]ew ladies….are ever seen at the theater; and the frequenting of them, even by gentlemen, is not considered a recommendation to their character.”

Public sexual practice become distorted under conflicting cultural movements that smashed together like tectonic plates. On the one hand, New York’s growing international prominence combined with new American religious fervor to create a chaste facade of propriety, a population that seemingly had no sexual life. On the other, growing immigration filled the streets with single men and women, restless and crammed together. The ‘sporting man’ culture — erudite, rich men of well-tweezed masculinity — created New York bachelorhood; a couple social classes below, the Bowery b’hoy, did the same, and had more fun doing it.

It’s under these conditions that a strange new craze erupted — the artist-model tableau, New York’s first unofficial flesh show. I call it the Era of the Nude Body Stocking.

In the early 1830s, legitimate stages began presenting tableaux of the human form, ‘living statues’ as they were called, stationary figures in nude or white body stockings, in classical poses. Assumably there would be some musical accompaniment or a reading of poetry, with tasteful lighting illuminating the heavenly contours of the human form. Very tasteful, right?

Down-market stages ran with the idea, eventually contorting it for a more tittilated crowd. Early instances of the ‘artist model’ presentations had men dressed as women. Quickly, women joined them on stage. And then, sometimes, the body stockings came off entirely. 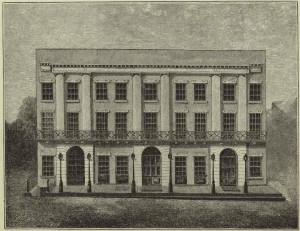 One of the most famous stages for this skimpy sort of tableau vivant began with less prurient intentions. Palmo’s Opera House (pictured above, 39-41 Chambers Street), opened in 1844 by an Italian immigrant Ferdinand Palmo. Italian opera had debuted in New York in 1825 at the Park Theatre, and instantly meshed with the upper class notions of acting more European. But working class New Yorkers didn’t quite warm to it; according to Mark Caldwell, “[o]pera was the ambrosia to a self-professed elite but chloroform to the masses.”

Palmo, owner of the Cafe des Mille Collones right around the corner, threw his money into the new opera house in an effort to bridge the gap. His first production was Bellini’s ‘I Puritani’, launched in February 3, 1844. The masses stayed away, in droves. Palmo kept the opera house open for two years, fending off mounting debts. At one point, performers went on strike — in the middle of a performance — because they had not yet been paid. 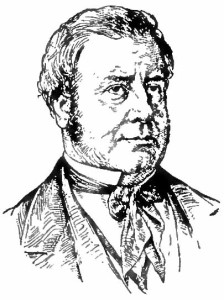 The restaurateur lost all his money in the endeavor and promptly lost his opera house as well. The stage then passed through various hands, some taking a crack at legit amusements, with ballet and even Greek tragedy.

A showman William Burton (at right) took over the lease in 1848 and threw out those high-falutin acts. Burton was concerned with mainstream entertainment, not art per se. And it was during Burton’s variety programs — which notably featured the best minstrel acts in Manhattan — that this unusual, shall we say, indiscreet tableaux made its debut, a presentation of lilywhite, illuminated flesh decorating an evening of song and dance.

In most cases, it was presented as a straight-up art lesson, with such mythology themed dioramas as ‘Psyche Going To The Bath’ and ‘Venus Rising From the Sea’. But, as I said, Burton didn’t care to sell art. He sold a view to nude bodies — or bodies that at least appeared nude — and soldout crowds raced to have a look.

But what if you wanted to see all this solitary nudity but the damned horse carriage had made you late? No worries, for at the newly named Burton’s Chamber Street Theater, you were provided with a New York first — numbered reserved seats.

Burton’s stage wasn’t the only place displaying ‘artist models’; it soon became so common on New York stages that it soon became incorporated into productions, such as the extravagant ‘The Black Crook’ at Niblo’s Garden in 1866, considered the first Broadway musical.

Obviously, the degree to which onstage nudity appeared scandalized proper New Yorkers. In fact, in 1848, police raided several establishments, including Barton’s. According to a contemporary account by Foster Rhea Dulles, a “beautifully formed creature, just drawing on her tights for the Greek Slave, and some of the others, were so dreadfully alarmed at the sight of the police with their clubs in hand that they seized up a portion of their garments in order to hide their faces, forgetting their lower extremities, thus making a scene mixed up with the sublime and the ridiculous.”

While prudish tastes frowned upon such displays, they never quite went away. Even as late as the 1920s, Florenz Ziegfeld frequently paid homage to the craze during his famous Follies.

As for the old opera house, it would continue featuring minstrel shows and comedy pieces well into the 1860s. For a short time it even served as federal courthouse before its demolition in 1876.

And here’s the final kicker — Palmo’s Opera House and its later incarnation as Burton’s Chamber Street Theatre was sat on top of — you guessed it — the African Burial Ground!