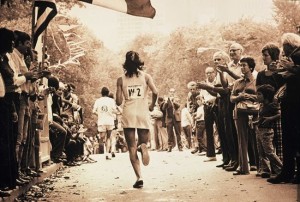 The first woman to run the Boston Marathon in 1967, Kathrine Switzer, meets well wishers during her 1974 run in the New York Marathon. Incidentally, she won the women’s division that year, with a time of just over three hours, the second longest winning time in the marathon’s history. In comparison, last year’s winner in the women’s category, Derartu Tulu, won by a time over 35 minutes faster.

This year’s ING New York Marathon is Sunday, November 7. It’s the most energetic, interactive sporting event in the city, and I recommend pulling up a lawn chair anywhere along the course through all five boroughs. (Here’s the map.)
For a warm-up, download our podcast on the history of the New York Marathon, featuring guest host (and marathon runner) Tanya Bielski-Braham. Here’s the original blog posting for the podcast. You can also catch the documentary Run For Your Life, on the colorful life of New York Marathon founder Fred Lebow, on PBS this weekend (just check your local listings).

(Picture above by Ruth Orkin, source)

1 reply on “The race is on! Retracing the New York Marathon”