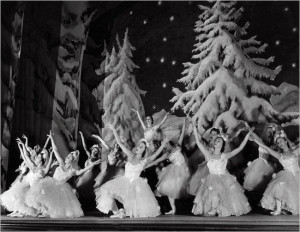 Ballerinas in their first flight of The Nutcracker: the Ballet Russe at the 51st Street Theater, 1940 (Picture courtesy the New York Times)

Few ballet productions of the last century had more influence on American culture than George Balanchine’s 1954 edition of Tchaikovsky’s The Nutcracker, as performed by the New York City Ballet. Although not purely conceived as a Christmastime show, the characters of The Nutcracker were welcomed into the pantheon of holiday images from the moment they appeared on opening night, February 2, 1954, fueled by multiple television appearances during the ’50s and ’60s.

Far from simply presenting the show as originally seen in Russia and throughout Europe in the 1930s, Balanchine made notable changes to the full-length work that have stayed firm even within modern presentations of the ballet. Balanchine’s footwork has also been largely preserved.

But if Balanchine is responsible for making The Nutcracker a valuable holiday tradition, then it is with grief that I inform you that Balanchine’s troupe was not the first to perform The Nutcracker in New York. In fact, his was 14 years too late for that distinction.

The first appearance of The Nutcracker on American soil was performed by the Ballet Russe de Monte Carlo, an offshoot of the great Ballet Russe that eventually splintered into two rival companies. As a united company, they had toured the country in the 1910s, making their New York debut on January 17, 1916, with a selection of shows, including SchÃ©hÃ©rezade. By the 1930s, they were two separate, warring ballet troupes; both toured the United States, sometimes to great confusion. 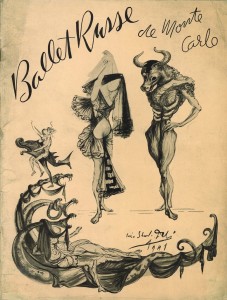 The Ballet Russe de Monte Carlo, under the direction of Sergei Denham, made the 51st Street Theatre their home for their 1940 season. On October 17th, they unfurled their version of The Nutcracker for the very first time, an abridged, one-act version staged by choreographer Alexandra Fedorova.(At left, the cover of a Ballet Russe program from the 1940-41 season.)

It can’t have been that well received because it took four whole years for another production to appear, in San Francisco in 1944.

Balanchine of course was quite aware of these productions; he’d choreographed for both versions of the Ballet Russes, was an adviser on the San Francisco show and had even danced in the show himself, back as a young man in St. Petersburg. He would bring all these experiences into his version which would eventually pirouette into an annual holiday tradition.

The New York City Ballet still performs the show annually; you can check in here for tickets and showtimes, through January 2. If you want to look in on the original stage on which the ballet was first performed, it’ll definitely be open on Christmas Day. The 51st Street Theater now houses the inter-denominational Times Square Church.

HOW NEW YORK SAVED CHRISTMAS Throughout the week I’ll spotlight a few more events in New York history that actually helped establish the standard Christmas traditions many Americans celebrate today. Not just New York-centric events like the Rockefeller Christmas Tree or the Rockettes, but actual components of the holiday festivities that are practiced in America and around the world today. We started this series last year; click hereto read past entries.