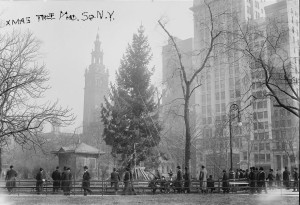 HOW NEW YORK SAVED CHRISTMAS Throughout the week I’ll spotlight a few more events in New York history that actually helped establish the standard Christmas traditions many Americans celebrate today. Not just New York-centric events like the Rockefeller Christmas Tree or the Rockettes, but actual components of the holiday festivities that are practiced in America and around the world today. We started this series last year; click here to read past entries.

The New York Tribune from Christmas Eve 1912 cheerfully attempted to use the symbol of the Christmas tree as totem for class struggles between the rich and poor. In case you missed what they were doing, the headline proclaimed: “HOW THE CHILDREN OF THE RICH AND POOR ENJOYED XMAS TREES — BUT IN DIFFERENT WAYS.”

The story recounts two Christmas events. On Ellis Island, children sang carols and patriotic anthems in glee and appreciation around two large trees bedecked with candles. Meanwhile, at the newly opened Ritz-Carlton at 46th and Madison, the children of wealthy New Yorkers gathered around an opulent tree with what is being described as holiday malaise. “Children in broadcloth and furs, accompanied by their mammas in silks and velvets and sables, smiled in well bred manner when something pleased them, but showed no other emotion.”

But it’s the Christmas tree mentioned in an adjoining article that would be more historically relevant. “2,300 LIGHTS ON CHRISTMAS TREE, FINE PROGRAMME IN MADISON SQUARE FROM 4:30 TILL MIDNIGHT, FREE TO MULTITUDE.”

The Christmas Eve Madison Square celebration was derived from the well-meaning progressive push by social activists to care for the city’s poor. Plans for an outdoor public Christmas tree were devised by Emilie Herreshoff, wife of the prominent chemical scientist J.B.F. Herreshoff, in emulation of European civic customs. (Mrs. Herreshoff’s other claim to fame would be her messy divorce from Mr. Herreshoff just a few years later.)

It would be a clean, proper, somber affair, closely tied to Jacob Riis’s equally non-riotous New Years Eve celebration scheduled the week after — righteous counter-programming to the Times Square celebration. Riis believed that the holidays were not a time wild behavior, and these events would provide the poor with ‘acceptable’ alternatives.

Below: Madison Square, how it looked in 1907 (with the Flatiron to the right. (Courtesy LOC)

The organizers knew they were doing something unique, but probably did not realize the special significance of the event. Their 70-foot-tall imported tree from the Adirondacks, festooned with lights from the Edison Company, would be the first outdoor community Christmas tree in the United States.**

This is not an insignificant milestone, especially today in a age where public displays of holiday expression and religious belief are constantly being debated. This ‘Tree of Light’, mounted in cement, was such a novelty that almost 25,000 people showed up that night to witness it and enjoy an evening-long slate of choral entertainment.

The location was significant as well, as the nearby Madison Square Garden sometimes hosted Christmas celebrations. Those mostly charged an admission price, however, and certainly left the poorest of New Yorkers out in the cold.

The New York Times laid it on thick the following day, reporting, ‘”The Almighty put snow on the tree to make it prosper,” said an old lady who hobbled along in crutches.’

They also ran this poem about the Madison Square tree: 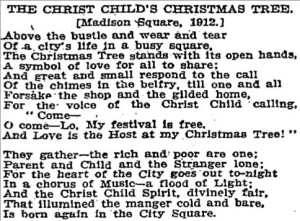 By the following year, the Salvation Army would take the reins of the popular event, offering up “10,000 hot sausages and 10,000 cups of hot coffee” for arriving crowds. According to the same article, ‘moving pictures’ were even shown in a different area of the park.

Today the Star of Hope monument in the park commemorates these early Madison Square celebrations.

**The Tribune article says that “Boston and Hartford, Conn., following the example set here, will have public trees to-day,” so one could generously say at least that the honor is shared.

Beautifully said, and timeless. You’ve inspired me to make the sojourn from Detroit to N.Y. to visit this gracious ‘park’. BTW, one of my ancestors played a big part in shaping the beauty of Central Park (i.e., F.L.Olmsted). Have a wonderful New Years!!

This is how the Madison Square Park Conservancy describes its own history. It’s sort of similar to your description, in that it also involves lights and a tree. But something else has been erased. Can you spot it/

“Beginning in 1912, Madison Square was home to the first public holiday tree in the nation … Don’t forget to drop by our history booth to learn more about the Tree of Light and be a part of our new tradition by making a wish on our wishing tree!”