The canyon, as seen from the Empire State Building. (Photography by the Wurts Brothers, courtesy NYPL)

PODCAST: Times Square is the centerpiece of New York for most visitors and a place that sharply divides city residents. Nothing about it sits still. Even its oldest buildings are severely transformed and slathered with electronic imagery.

In 1900, the neighborhood surrounding the intersection of Broadway and Seventh Avenue was the drab Longacre Square, the heart of the horse and carriage industry, and few dared put a legitimate theater or restaurant so far north. But with the construction of the subway came big changes, and when the new headquarters for the New York Times arrived, so did a new name.

Listen along as we travel through the decades, through Times Square’s glory days of lobster palaces and celebrities, the introduction of electric advertisements, its gritty slide and eventual rebound. Is the new Times Square an extraordinary transformation? Or a travesty?

1909, when things weren’t quite so insane. I believe this is Broadway between 46th and 47th Streets. You see the Gaiety Theater on the left, as well as Churchill’s Restaurant. Long Acre Riggery sits next door, proving that the neighborhood’s transformation wasn’t as quick as you might have thought. There’s also an ad for Turkish Trophies cigarettes. 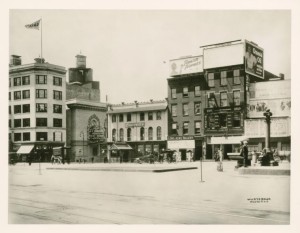 Rector’s Restaurant, the greatest of the so-called ‘lobster palaces’, where opulance and celebrity mixed with musical entertainment in an occasionally rowdy environment. 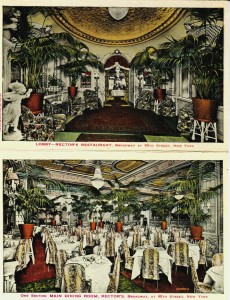 1910: The strangely orderly streets are still mostly filled with horse-drawn carriages and trolleys. Theaters have worked there way in by this time, including the New York Theatre on the left, and the Gaiety and Globe theaters on the right. (Courtesy Spooner Central) 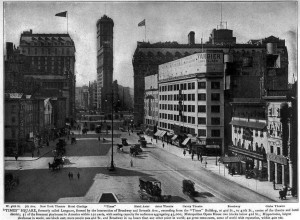 Between 1911-1915: Standing on 42nd Street, looking north, the Times Building and the subway entrance to the right. The theater built and named for George M. Cohan was completed in 1911. (Courtesy LOC) 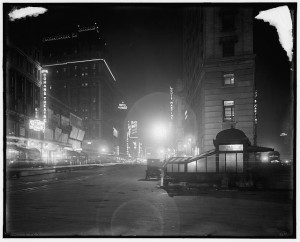 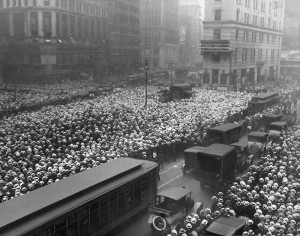 1931: No sign of a Great Depression here. Trolley tracks are still very much in evidence. (Courtesy Flickr/straatis) 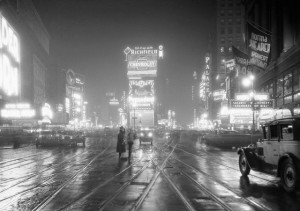 1935: The Paramount Building astride the Hotel Astor dominate the plaza. I’m not sure I would like negotiating this seemingly chaotic cross street. 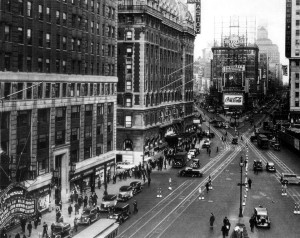 1945: Thousands arrive in Times Square to celebrate the end of the surrender of the Japanese and the end of World War II. 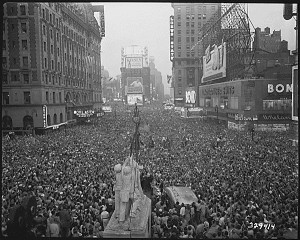 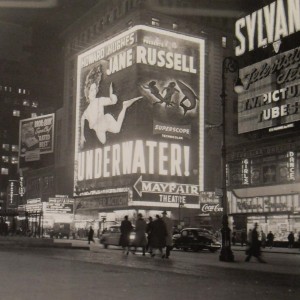 By the 1960s, old stages and movie theaters were giving way to a new form of entertainment, the adult kind. 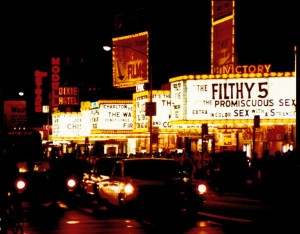 1965: The neon shines as bright as ever. Bonds Clothing Store thrived for years at this central location and provided one of its most memorable sign. Previously the space had been the swanky nightclub International Casino. In the late ’70s, the clothing store closed, and, in some clever combination, it became the nightclub Bond International Casino, home of the Times Square Riot of 1981. (Courtesy Panoramio) 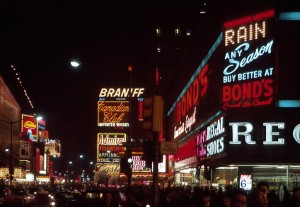 1970s: A strange mix of entertainments and ideas now permanently intermingle in Times Square. Cohan represents the past, while TKTS booth (which opened in 1973), providing discounted Broadway tickets and a safe haven for visitors, presents a possible key to its future. 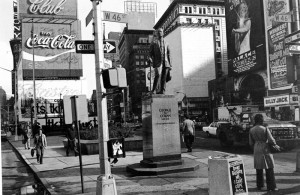 1985: By this time, the city had worked through almost two decades of improvement ideas for Times Square. (Courtesy Flickr/Jim In Times Square) 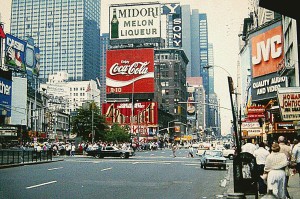 The New Amsterdam Theater, before it was renovated by Disney. (Courtesy Flickr/GuanoReturns) 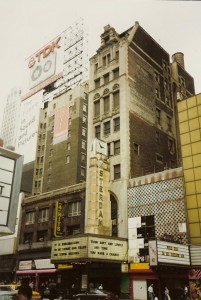 2008: Most of the seedier element of Times Square was eradicated by this time. (Courtesy zero null) 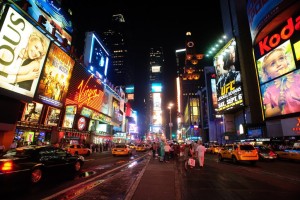 A fabulous video of various New Years Eve ball drops throughout the years, starting in 1978:

And to tie it all back to the beginning, here’s an Edison film shot from the top of the Times Building, from 1905. Most interesting, actually, is the view of Bryant Park and the large, stately Hippodrome.

This episode was so packed, we barely even talked about New Year’s Eve! For some historical nuggets on that annual event, you might like to listen to our old show on One Times Square. Also, if theater history interests you, check out out podcast on Florenz Ziegfeld.

7 replies on “Times Square: History in stages, chronicled in lights”

very complete about Times square history in your content.

I really appreciate this blog.

it is amazing to see all the people jammed in to TS in those fotos from the 30’s and 40’s.
another great post by the BB, as usual!

This is an amazing blog! I’m in a class covering the book “Times Square Red Times Square Blue” and it really helped me identify the changes that took place.

I think you mislabeled the 5th entry down. That’s looking south from the narrow end of the NY Times Building, not north. The angle of broadway is to the left of the building, the straight-run is 7th avenue to the right. Those lights are of Broadway below 42nd Street.

[…] If you want to read more about Times Square’s seedy past check out these sources:Museum of the City of New YorkThe New York Public LibraryThe Bowery Boys […]

HOW MANY PLACES ON EARTH MADE BY MAN ARE KNOWN BY EVERYONE EVERYWHERE, THIS IS ONE OF THEM, THE GREAT WALL OF CHINA AND THE PYRAMIDS ARE TWO MORE.