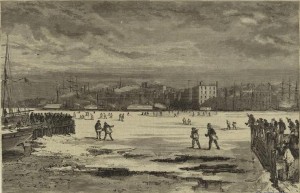 Daredevils trespassing the ice between New York and Brooklyn in 1871.

I spent much of New York’s Christmas blizzard nightmare in various airports throughout the country, unable to get back to La Guardia Airport, where it appears I would have just been stranded anyway.

With all the transportation fiascoes, the unplowed streets and the mounting piles of garbage, it seems like it was certainly the messiest of storms. But ranking in ranking it among the worst storms in New York City history, it doesn’t even make the top five! According to the city’s own ‘hazard mitigation plan’, “Since 1798, New York City has experienced 23 snowstorms with 16 inch or greater snowfall totals.” They also include a list of the most frightening blizzards in the city’s history, including the worst in 2006 and one from 1805 that doesn’t sound like so much fun (“48 hours of continuous snow”).

As horrible as it certainly was, however, imagine it paired with that most peculiar of natural interruptions — the freezing of the East River.

Having a key waterway turned into a veritable skating rink would be inconvenient today, though not the catastrophe it would have been in the 19th and early 20th centuries, when New York’s seaport was one of America’s centers of trade. Hundreds of vessels sat paralyzed along the waterfront, dozens more prevented from entering.

Before the railroad, New York relied solely on its ferry system to get people from Manhattan to neighboring towns like Brooklyn and Williamsburgh. These were clearly not functional when the East River froze, as it did on several occasions throughout its history, before heat-generating over development on both shores assured such events would happen less frequently.

Contemporary reports from one freeze in 1857 describe dozens of ferry cancellations in ways that hearken to the scenes in airports just a few days ago, with boats making their way across the river and returning to pick up new passengers — twelve hours later.

But just as people made the most of the late December blizzard fiasco — doing wacky things like skiing down Park Avenue at 40 mph — New Yorkers in the 1850s did not let something like a gigantic ice sheet go to waste. In 1852, “It is estimated that 20,000 persons must have taken advantage of the circumstance to walk, instead of sail from New York to Brooklyn and back.”

The thick ice sheet that accumulated over the East River in 1857 seems to have encouraged jovial behavior. Regaling the hundreds of walkers braving the temporary walkway, “the shores of either side were lined with people shouting, hurrahing and having a good time of it generally, and the utmost hilarity prevailed.” Among those that crossed the ice in the spirit of fun: the Reverend Henry Ward Beecher, “asserting that the trip was made to prove that it was not the wicked alone who could stand in slippery places.” [source]

It’s all fun and games, of course, until the ice starts melting. During an 1888 freeze, fish sellers at the Fulton Market lowered ladders down to the ice, allowing hundreds to cross. Unfortunately some got caught in the middle, trapped on ice floes, and had to be rescued by passing tugboats.

The year 1875 was an especially cold year, with the East River sitting frozen for almost four days. But an even rarer occurrence happened that year: the freezing of the Hudson River between Manhattan and New Jersey. While other parts of the Hudson regularly froze solid — indeed, the river was the principal supplier of ice for New Yorkers in the late 19th century — it was rare to have that span between New York and the shore to the west freeze to the point that people could cross with little difficulty.

It’s impossible to know the most severe freeze in the history of New York Harbor, but a leading candidate must certainly be the winter of late 1779-early 1780, which locked British-occupied New York in a sheath of solid ice and kept ships and ferries immobile for over a month. According to historian David Ludlum, “Judge Jones, who lived at Fort Neck (now Massapequa), wrote in his book that 200 provision-laden sleighs, pulled by two horses each, escorted by 200 light cavalry, made the five-mile trip from New York to Staten Island.”

3 replies on “Fun on the ice: Party time atop the frozen East River”

Fascinating post, these 19th century New Yorkers knew how to have fun! I can only imagine what people would do if the East River froze up today. Thanks for the snow list. I had always assumed the blizzard of ’88 was the worst. There’s a great book called ‘Blizzard: The storm that changed America’ by Jim Murphy. It tells a lot of exciting and some sad tales from that one.

I would like to know if there was a 20th century ‘freeze event’ on the East River, i.e. circa 1950. Why I ask is that I recall a significant ice build up that forced a tug boat against the park river wall (I’d say around the area of 10th St.; definitely below the Con Ed plant and old coal docks in the area of 14th St.). The tug boat had not only been forced to the wall area but actually lifted the tug boat. Family showed me this event but since they are no longer around to ask, I can’t say which winter this occurred.

During the american revolution in 1779, they all froze over and it was so bad that they were able to transport heavy cannon across the ice without it breaking!!!!