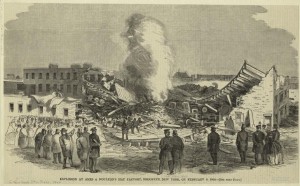 A long time ago, 151 years ago this month to be exact, a hat factory exploded in Brooklyn. Hats being far more prevalent in the social fashion then than they are today, New York and the surrounding area were, pardon the pun, brimming with them.

The city of Brooklyn had to make due with one less hat manufacturer on February 3, 1860, when a boiler accident at the Ames & Moulton’s Hat Factory, once located on the corner of Nostrand and Myrtle avenues, set off a chain reaction, blowing up the building and killing six people and maiming over a dozen others, “some of them so badly that their recovery cannot be hoped for,” according to one source.

The force and sound of the explosion woke people over a mile away. Reports say that the hat factory had only moved into the building just a couple weeks before and had employed “one hundred and twenty men and one hundred girls.”