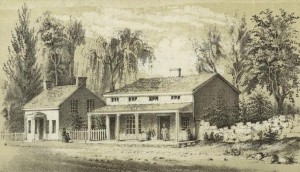 The Blue Bell Tavern, a rustic pit stop along Bloomingdale Road, witness to the changing fortunes of war. (Courtesy NYPL)

An old stone tavern once stood high upon the bluffs of Upper Manhattan, in an area many years later referred to as Washington Heights. The Blue Bell Tavern sat off Bloomingdale Road (where Broadway stretches today) nestled in a grove of trees, a modest two-story dwelling alit at all hours with wanderers.

One cold, stormy night some evening in November 1783, a damp and exhausted figure strode up to the door, a young woman who had escaped from her home many miles away. She was there to meet her lover who had already arrived at the Blue Bell, a man soaked, in disarray and wearing what certainly would have been a common sight for the day — a British uniform.

This man was a sergeant in the British military stationed in the Hudson River Valley. But the army was now retreating. Indeed, they were leaving New York that very month.

But he had fallen in love with this woman, who (as these sort of stories go) we know little about. We do know her parents disapproved of the British sergeant and would only relent to their marriage if he agreed to desert the army and remain in the United States.

On that rainy evening, the sergeant and his beleaguered love were married, here at the Blue Bell Tavern. As the story goes, it was a Quaker ceremony, for there were no other officiators that night at the tavern. 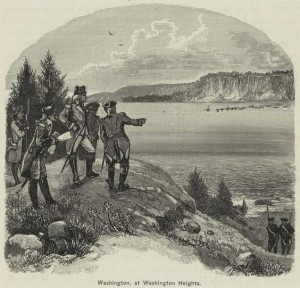 The Blue Bell, situated at today’s intersection of 181st Street and Broadway, was built in mid 1720s as a home and renovated into the type of pleasant inn that, by 1753, the venerable Cadwallader Colden (not the former mayor, but his grandfather and later governor of New York) could find “very comfortable” food and lodging with his friend James Delancey, the state’s lieutenant governor.

The tavern might have faded peacefully into oblivion if not for the Revolutionary War. When angry New Yorkers attacked the King George statue in Bowling Green at the foot of the island, his stone head ended up on a pole in front of the Blue Bell.

While the Continental Army fled from Manhattan during the month of September 1776, officers stationed here at the Blue Bell assessed their grim situation and coordinated the army’s next steps. With the tavern located so close to a key pathway out of town, it also became a headquarters and lodging for British officers after Washington’s army left. At one point, even Colonel William Howe, head of the British forces, himself stayed here.

It was during early battles in New Jersey that one British officer, one Colonel Ralle, found true love at the Blue Bell in the form of the innkeeper’s sister, and he married her there within the day. It would not be the last torrid romance to blossom here. 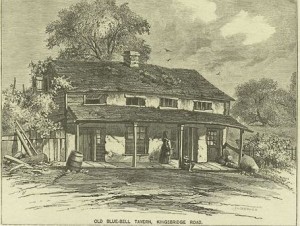 In November of 1783, George Washington and his victorious army re-entered New York, this time to push the British out of town and experience a new, free American nation from the vantage of the ravaged port city. “I remember well our march up the hill, and the noble appearance of George Washington as he sat on his big bay horse,” said a ‘veteran’ of the war in Appleton’s Journal.

George would even stay for an evening at the Blue Bell, awakening early to prepare his army’s grand entry down Bloomingdale Road and into the city. (Another important tavern of the day, the Bull’s Head, would also play a prominent role in Washington’s arrival into the city.) But on that day, they would add two more people to their procession.

The colonel and his new bride — the ones whose rendezvous at the Blue Bell led to their Quaker marriage — emerged from behind the building and called out Washington’s name. Given his rumpled British uniform, I imagine this created quite an uproar. The pair were taken into custody, and the British officer recounted his romantic tale. He wished to desert the army and join the Americans if only they would provide protection for him and his young bride. Indeed, with so many Loyalists still in the city, the soldier’s betrayal would certainly have been met with retaliation.

The tale apparently amused the troops, flush with the excitement of victory. Somebody even wrote a poem in the couple’s honor. You can read the whole thing here, though it begins: “A soldier and a maiden fair, Helped by shy little Cupid, Fled from the camp and momma’s chair, (Such guardians, how stupid!), And to the Blue Bell did repair, To have themselves a-looped.” We can assume with the lighthearted tone of the poem that things turned out well for the happy couple.

Below: A miniature of the Blue Bell, displayed at the Museum of the City of New York when it opened the doors to its new Fifth Avenue home in 1930. (Courtesy LOC) 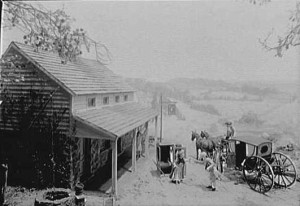 The old tavern passed through many owners (and many names) through the 19th century and eventually returned to its original purpose as a residence. One old source suggests that the building burned to the ground in 1876, though it may have survived this blaze into the new century. Whatever structure stood here then was torn down by 1915. But tales of the Blue Bell entered nostalgic accounts of the Revolutionary War almost immediately, as 19th century historians struggled to piece together the American narrative from those who still remembered it.

The Blue Bell lived on long after its demolition in a most curious way — as a well-known miniature housed at the Museum of the City of New York. An issue of Popular Science Magazine from 1930 observes the construction and installation of the Blue Bell exhibit, which made its debut that year in the museum’s new home on Fifth Avenue and 103rd Street.

On some days, you can go to the former spot of the Blue Bell Tavern and experience a Gothic romance of your own. Standing there today is the RKO Coliseum, once one of Manhattan’s largest movie theaters, still operating as Coliseum Cinemas. (Here’s a street view of that corner.)

Below: The Coliseum in Washington Heights, date unknown (but there’s a vaudeville bill on one of the marquees!) 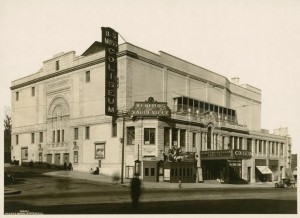 Thanks for this. I’ve been looking for more info on the Blue Bell for years. Since I grew up in Washington Heights, I would visit that theater. It was turned into a multiplex,the kind in which you could hear the movies playing next door. And the floors were never cleaned. Pretty awful.

OMG I’m in my late 40’s and remember going to the Coliseum, first theater I saw a movie and my children. Today my children are 20 and 16 years of age. I remember back in the late 1970’s my sister had a boyfriend who worked there and a whole bunch of us would get in for free. Those were the great days…Beautiful neighborhood. Nothing like today..

Wow, I read this story and it hit me .. Unbelievable My name is Tony I’m from Washington Heights. And 1969 I took my girl to the RKO to see made midnite cowboy and I was in love with her then and I’m still in love with her now ,I found her 40 some years later and today I read this story and it connected me to that time..a true gothic love affair and I also write poetry lol..wow wow

Wow, this is quite a story of Washington Heights. I never thought the area was such a big part of NYC history. I grew up in Washington Heights and lived there till my late teens. My mom still lives @179th and Audubon. Thank you!

Wonderful post and visuals. There should be an historic marker to indicate this important site in our American history.

It’s a real shame the Coliseum Theater has been torn down so close to it’s centennial, just to soon be replaced with another shopping center. I remember going there with my old man and on school trips a few times. Such a historic site should have been turned into a kind of museum covering Washington Heights’s history.

I grew up in Washington heights and saw many movies throughout the 80s 90s and early 2000s there. I was saddened when I saw it being demolished.