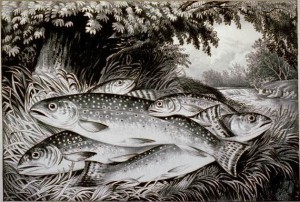 Trout by Currier & Ives, 1872. Sadly there are no extant images of Mrs. Trout.

I could not let this week pass without mentioning a sadness that fell over lower Manhattan 150 years ago today. A lament over the number of Southern states seceding from the union? The grief of Democrats over the inauguration that very day of a new American president, that uppity Illinois lawyer Abraham Lincoln? Concerns over the raucous administration of Mayor Fernando Wood?

No! It was the death of New York’s best known trout, known to all by her regal name, Mrs. Bigge Trout.
Mrs. Trout has been all but forgotten in the annals of both fish and human history. She would have been one of dozens of ill-kept aquatic creatures in the basement of Barnum’s American Museum, at the corner of Broadway and Ann Street, at the foot of City Hall Park. 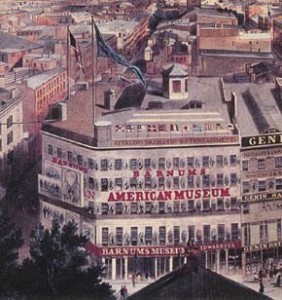 The museum was an amalgam of delights, from wax figures to ‘freaks’ of nature, murals of historical reenactments to temperance entreaties in the lecture hall. But showman P.T. Barnum also specialized in a few live animals.
Fish were an especially popular delight to mid 19th century New Yorkers in a world without private aquariums. The museum featured a range of exotic fish such as “the angel, peacock, four-eyed cherub, cow, sturgeon, porcupine, and Spanish Lady as well as the squirrel, crimson cavaretta, parrot, grouper, zebra and yellow snapper.” Long after the passing of Mrs. Trout, Barnum would expand the aquatic feature to briefly include two doomed Beluga whales.
In 1861, the large, beloved Delaware trout would have been quite the popular attraction because she was pregnant. Very pregnant. According to the New York Daily Tribune, Mrs. Trout received her fatal injuries while attempting “to bring into the motley world seven thousand and sixty eggs at once.” The paper applauds her gusto in her attempt to increase “the census of the piscatorial kingdom by a number almost fabulous.”
The writer speculates: “Probably the odd sixty proved her ruin, but she is by no means the first who has fallen a victim to overweening ambition.”
Let me be clear here. I was reading this old issue of the Tribune looking for a more serious subject, and this, the death of Mrs. Bigge Trout, came before articles on the country’s impending strife, events that would lead to the Civil War. Urgency was apparently not a requirement for story placement in 1861.
Although Bigge — may I call her Bigge? — died on February 28th, her passing was reported in the March 4th issue with great fanfare (and some serious tongue in cheek).
If descriptions are to be believed, museum workers wore black, including the man in the box office with “crape on his hat.” Even the other animals, trapped in their confines and plaster dioramas, were reportedly sullen that day.
In all seriousness, Barnum’s would have offered New Yorkers the closest approximation to a modern ‘natural history’ experience, although proper care of the animals would have been a principal concern only to the extent that living creatures sell more tickets than dead ones. (Although there were plenty of those as well, stuffed and mounted throughout.)
The Tribune mentions that Mrs. Trout was “interred with all the honors” but does not list her final resting place. Morbidly, I wonder if that interment might have been the dinner plate of another museum inhabitant. “Her mourning friends, the other fishes, were prevented, by prior engagements, from following the remains to their last resting place.”
So this weekend, pour a little out for Bigge on this, the 150th anniversary of her passing to that great Barnum spectacle in the sky.
You can read the original article here. If you want more information on Barnum’s American Museum, check out our podcast on the subject from 2008.
Below: A page from the 1850 Barnum’s Museum guide, from CUNY’s excellent interactive website on the museum 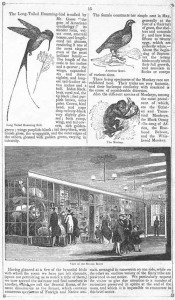 And finally, an advertisement from July 1860, unveiling some of the delights that would have been in the museum at around the time of Mrs. Trout’s death. It’s really worth your time to click the image and read through these. Don’t miss the Giant Baby! 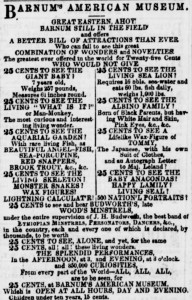