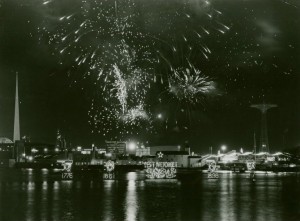 An elaborate fireworks celebration over the grounds of the World’s Fair of 1939-40. (I’m not sure which year this picture was taken.) The wars of American independence, the Civil War, the Spanish-American War and World War I are represented in a lighting display in the foreground.

And you also may have noticed something familiar over to the right. It’s the famous Coney Island parachute jump which transferred its residence its new Brooklyn residence seventy years ago. The beloved amusement landmark has seen a great many more July 4th celebrations long after this picture was taken. And sits a short distance from Nathan’s, where thousands of hot dogs have been shoveled into people’s mouths. (Read more here about the history of Nathan’s Hot Dog Eating competition.)