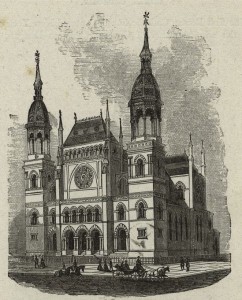 Early news reporting on the celebration of Hanukkah (or Chanukah, as it was popularly referred then) in New York usually took a arms-length approach, as most of their readership knew little about the celebration 100 years ago. More than one old Tribune or World carried a variant of the headline ‘Jews Celebrate Chanukah’Â ,Â as though there might have been some doubt. A 1905 headline informs: ‘Chanukah, Commemorating Syrian Defeat, Lasts Eight Days.’

It wasn’t just non-Jews that were misinformed about this seemingly mysterious holiday. A December 1894 edition of the New York Sun asks ‘Christmas or Chanukah?’ as a prominent rabbi from Temple Emanu-El (pictured at right, in its Fifth Avenue incarnation) “rebukes the tendency of Jews to confuse the festivals.”

In fact, many Jewish leaders at this time were concerned that many traditions were being abandoned, the better to acclimate in a city that was decidedly more Christian-seeming.The wife of American Jewish scholar Richard Gotthell*Â worried in 1900 that “this festival occurs so nearly coincident with the Christian festival of Christmas that there is danger that the observance of one may be lost in a gradual assimilation with the other.”But with the mass immigration of Eastern European Jews to New York in the 1900s, soon thousands celebrated the holiday — and newspapers could hardly be so cavalier. 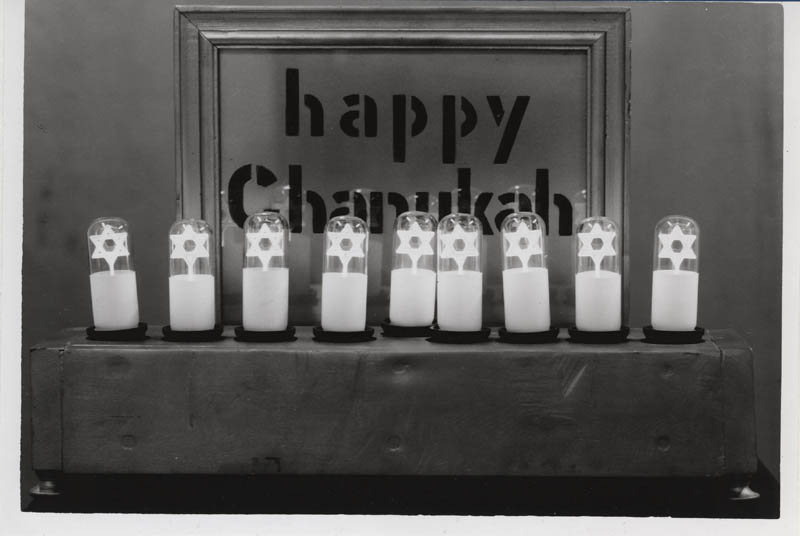 One event they took particular note of was the Chanukah celebration by the Federation of American Zionists, at the Herald Square Theater on January 1, 1911. One anecdote sprang out at me: “Dr. S. Levin spoke in Hebrew for an hour, on ‘Jewish Life and Art.’ He took exception to a certain Jewish speaker who recently declared that the Jews had produced nothing in art. Dr. Levin asserted that he was greievously wrong.”

Across town at that very moment, a young Russian Jew named Irving Berlin was hammering out tunes in Tin Pan Alley and would debut, just a couple months later, ‘Alexander’s Ragtime Band’, while other songwriters of Jewish heritage, such as Jerome Kern, were right then hard at work reinventing the American songbook. So, yes, Dr. Levin, grievously wrong.

And of course, these Jewish songwriters would go on to even help reinvent Christmas itself via a flurry of popular holiday tunes, like Berlin’s own ‘White Christmas.‘

Pictured at top: A 1945Â Hanukah greeting card, issued by the Jewish Welfare Board, 1945

[…] coverage back in the day regarding the holiday, and most “took an arms-length approach,” as Bowery Boys puts it. “More than one old Tribune or World carried a variant of the headline “Jews Celebrate […]