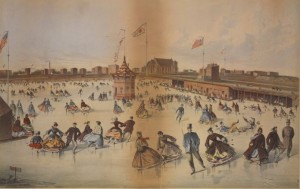 Williamsburg(h)’s Union Pond, one of the finest destinations for ice skating in the city, 1863. It later became America’s first enclosed baseball field.

The nation was at war one hundred and fifty years ago, but that didn’t stop the austere celebrations in the ‘borough of churches’. But while thousands of Brooklyn residents attended church that morning in 1861, many participated in a more whimsical holiday celebration — wild and uncontrollable ice skating.

So famous was the city of Brooklyn’s famed ponds — which reliably froze each winter — that New Yorkers by the boatloads crammed into ferries across the East River to join in the icy merriment. On really cold days, of course, it was often the East River itself that froze solid. But in 1861, an unseasonable warmth kept the river disappointingly liquid, forcing thousands of skaters upon Brooklyn’s small ponds where the ice quickly melted. 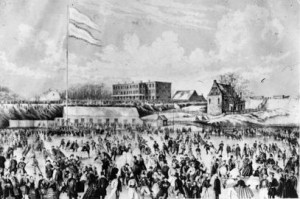 For instance, Washington Pond (at right), at 5th Avenue and 6th Street — then considered Gowanus, today it’s Park Slope — was normally ideal for skating. Horse-drawn streetcars took crowds right from the Fulton Ferry to the door of the nearby old stone house, built in 1699 and famous for its role in the Revolutionary War. (It’s why the pond is named for Washington, after all.) But on Christmas 1861, “the ice was unpleasantly rough” there.

Skaters may have found more success at other Brooklyn skating destinations. The Capitoline Skating Lake, near the train station in the former independent village of Bedford, was known as the “principle pond of the Western District.” In Williamsburg, the versatile ‘world-renown‘ Union Pond drew thousands during the winter and thousands more in the summer — as the nation’s first enclosed baseball field. On this particular day, the newly opened pond in its ‘gay and brilliant appearance’ was crammed with skaters laughing and caroling, in various states of sobriety.

By the afternoon of Christmas 1861, most of the closest ponds were mushy and nearly dangerous. At a pond on Third Avenue, “a gentlemen with two ladies fell trough the ice and took their Christmas immersion without any material damage save a very decided shivering,” according to the Brooklyn Eagle.

Urban ice enthusiasts were forced to follow the advice of horsecars festooned with the signs ‘Good Skating in East Brooklyn’. I’m not sure exactly where crowds went that day, but a New York Times article from a three years later lists several ‘free ponds’ that might have been available for ice skating that day, including Seller’s Pond “in Bedford, near the Jamaica Pond Road”, “Dumbleton’s Pond on Myrtle Avenue” and the Suydam’s Pond, “on Atlantic-avenue near the Hunters-Ferry road.”.

All that skating and merriment drove many to more intoxicating holiday spirits, preferring their drinks ‘on the rocks’, or as the 1861 Eagle reports, “the boys will insist that ‘Christmas comes but once a year’ and with it comes a large measure of ‘good cheer’ and so they must get cheerful.” The most serious altercation came with one reveler, tiring of throwing rocks at boys, attempted to pistol whip a police officer.

The more respectable Brooklynites traipsed home at dawn, as the gaslights meet the fading light, casting the wet snow in a bright glare. Many reformed again for choirs of caroling, or else to distribute presents at charity ‘Christmas tree exercises’, where children lined up outside downtown theaters hoping for presents and a gander at the gorgeously trimmed tree, sparkling with candles.