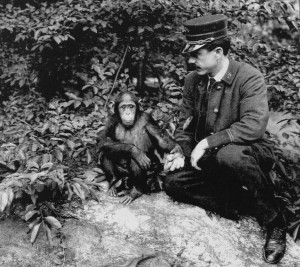 The charismatic Baldy the Chimp, on display during the 1910s, was one of the House of Primates’ most famous inhabitants. (Pic courtesy Wildlife Conservation Society)

The landmarked Monkey House at the Bronx Zoo was officially closed as an exhibition space this past Monday. It was really quite a throwback, a lovely fossil of a building but an artifact of antiquated zoological style. Even as the Bronx Zoo’s popularity soared due to regional exhibits like the Congo Forest, Wild Asia and Madagascar, the Monkey House was kept open, displaying smaller primates like marmosets and tamarinds.

While hardly ideal for any type of primate today — inmate or visitor — the Monkey House is one of the few links to the zoo’s beginnings.

Originally called the House of Primates, the quirky Beaux-Arts structure by Heins & La Farge was finished in 1901, making it the oldest landmark in the park. (The Reptile House, which opened in 1899, is not landmarked, presumably because most of the building has been replaced.) The zoo once kept all its apes, baboons and monkeys here, including Baldy the Chip (at top), amateur roller skater and acquaintance of President William Howard Taft. Today, you can still find baboon adornments atop the entrance, made by famed animal sculptor Alexander P. Proctor.

This building has been closed before, in 1950, when the inhabitants were shipped out to the newly built Great Apes House* (which no longer exists). It was reopened in 1959 and has housed the smallest monkeys from that date until this past Monday.

The Monkey House was also witness to the sorriest moment in Bronx Zoo history — the exhibition of the Congolese pygmy Ota Benga at the House of Primates in 1906.

For more information on Ota Benga and the rest of the zoo, check out our podcast on the history of the Bronx Zoo.

*As evidenced by this depressing article, the Great Apes House was no great place with primates either.

1 reply on “Movin’ out! The Bronx Zoo closes the Monkey House”

I heard that Ethel Merman was there with her grandchild once when the child began acting up. She grabbed the child by the arm and told them to straighten up or she’d “toss ya in there with the fuckin’ monkeys”. Apparently a reporter was within ear shot and it made the papers. Although I haven’t ever gotten solid proof. It’s a pretty funny story and not out of character for Ethel Pottymouth Merman.